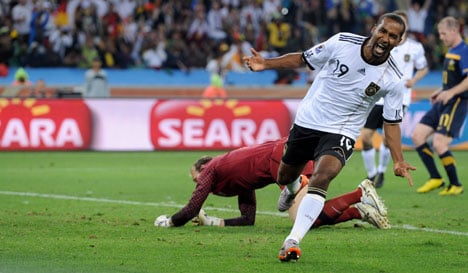 Goals from Lukas Podolski, Miroslav Klose, Müller and Brazil-born striker Cacau were just rewards for a team which also had a hatful of other scoring opportunities.

The victory leaves Germany atop of Group D, Ghana having beaten Serbia 1-0 in the day’s other game.

Podolski opened the scoring in the ninth minute, the happy recipient of a text-book training ground move executed to clinical perfection.

After Özil had played in Müller, the Bayern Munich right winger cut the ball back across the face of the goal for Podolski to hammer home left-footed, with Australia goalkeeper Mark Schwarzer getting a hand on it.

Klose, top scorer in the 2006 World Cup, made it 2-0 in the 27th minute with a well-taken goal – and his 11th in World Cup finals – rising between Australian captain Lucas Neill and Schwarzer to head powerfully home from a Lahm cross from the right.

“Everything worked well and it is important that things went well in the first game,” Klose said. “We have earned some respect. You could see that we had fun playing football out there. I know what I can do. I feel great.”

“I am very happy about the performance, we showed some quick passing and good speed,” he said.

The Socceroos then paid a heavy price for the dismissal of Tim Cahill, shown a straight red card in the 56th minute by Mexican referee Marco Rodriguez for a very clumsy challenge on Bastian Schweinsteiger.

Two goals in a matter of minutes from Müller (67) and Cacau (70), on as a replacement for Klose, sealed Australia’s dismal start to their third World Cup campaign.

Müller, who started the season in Bayern Munich’s reserves, looked like he’d overrun a Podolski through-ball it but he dragged it back and shot accurately past Schwarzer, in off the post.

With the Australian defence in disarray, Caucau then had a simple tuck-in from another inch-perfect pass into the box by the 21-year-old Özil.

It was Australia who had the first real chance of the game, Lahm clearing a close-range effort by Richard Garcia in the fourth minute.

And for all their fine attacking instincts, Germany did at times look slow to close down at the back, allowing time and space for both Garcia and replacement Brett Holman to have shots on target.