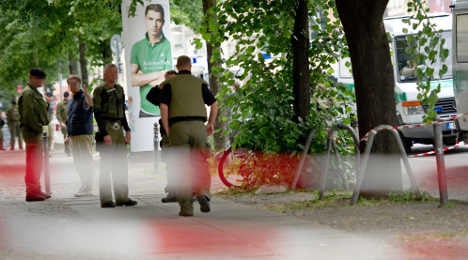 Police seal off the spot where their colleagues were hurt. Photo: DPA

Both officers had to have surgery after being hurt by the explosion, which was described by a spokesman on Sunday as a shrapnel bomb containing pieces of metal or glass. He said it was thrown from within a group of anti-capitalists at the demonstration.

The injuries suffered by the 36 and 47-year-old officers are not said to be life-threatening. A further 13 officers were slightly injured during the demonstration.

Police came under attack when the demonstrators, estimated at between 15,000 and 20,000 in number, reached Torstrasse in the Mitte district of the capital. The protestors pelted officers with stones, bottles, and then the explosive, injuring the two officers.

At least seven demonstrators were later arrested, while organisers criticised the police for provoking the marchers and arresting people for no reason.

The demonstration had been called by an alliance of more than 100 groups including trade unions, the Left party and social pressure group Attac, under the banner “We’re Not Paying for Your Crisis.”

Organisers had called for the march through the city to be loud but peaceful, saying they wanted to make a stand against the government’s savings plans which they said would increase the gap between rich and poor.

A similar demonstration, under the slogan “Fair is Different,” and also involving up to 20,000 people, took place in Stuttgart, involving a similar range of groups.

“If the government thinks it can continue to protect those who caused the financial crisis and burden the victims even more – then this will just be the start of our protest,” said Nikolaus Landgraf, Baden-Württemberg head of the German trade union association told the crowd in Stuttgart.

And although Chancellor Angela Merkel has defended the plans to cut social provision budgets by billions, others in her party seem to be beginning to consider more progressive measures.

Finance Minister Wolfgang Schäuble has reversed his position on an increased top income tax rate, now saying such a move by the parliament could be possible. “It is the right of the MPs to replace some measures with others,” he told Der Spiegel.

This would also apply to a higher top tax rate. “Why not?” he asked, despite having previously ruled it out.

Peter Müller, fellow Christian Democratic premier of Saarland has spoken out in favour of levying more tax on luxury goods. He told the Wirtschaftswoche magazine he would be in favour of a 27 percent value added tax on things such as yachts, limousines and champagne.

Christine Lieberknecht, Christian Democrat premier of Thuringia, spoke out against the cutting of parental allowances for the long-term unemployed and those on the most basic benefit scheme Harz IV.

“The fate of most Harz-IV recipients is already difficult enough,” she told Der Spiegel.

Other Christian Democrats also made similar statements over the weekend, with even the Free Democratic Party budget expert Otto Fricke noting that there is a constitutional duty to provide for the children of Harz IV recipients.

Merkel told the Bild am Sonntag newspaper she wanted the savings package to be passed without major changes in order to preserve trust in the coalition.

“The measures in the work market area are actually designed to put more long-term unemployed into work,” she said. “Apart from the necessary cuts in the social arena, business is also doing its part, as well as civil servants and the administration.”

Joachim Gauck, presidential candidate nominated by the Social Democratic Party and Greens, warned on Friday that although savings must be made, they must be made in a fair way, and suggested wealthier people pay more.