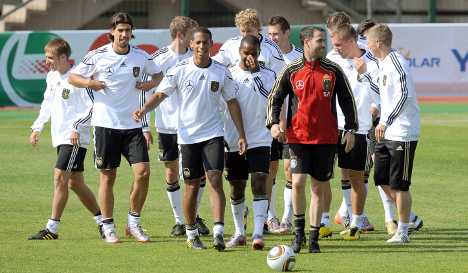 The Germans are three-time winners of world football’s showpiece tournament, but Joachim Löw’s side face a bumpy ride against Australia, and also Ghana and Serbia, in a challenging Group D.

“Of course there is some kind of pressure as we go into this game as favourites,” acknowledged German winger Lukas Podolski.

“But we will go into our three group games with confidence and we really, really want to win the opening game.

There has been much debate over whether Miroslav Klose, the top scorer at the last World Cup, or Stuttgart’s Brazilian-born Cacau will start as Germany’s lone striker.

Germany will already be without captain Michael Ballack, who will miss the entire World Cup through injury and who has just been shown the door by English champions Chelsea.

Australia, however, received a boost with the news that key man Tim Cahill and Blackburn Rovers midfielder Brett Emerton, who has not played in any of his team’s three warm-up games because of a calf injury, were both fit to play the Germans.

Australia, coached by Dutchman Pim Verbeek, conceded just four goals in 14 matches in qualifying, and Everton’s attacking midfielder Cahill said the ‘Socceroos’ were happy to have been labelled “boring” by Löw.

“Let them throw stones, we’ll just cop it on the chin,” said Cahill, who missed Wednesday’s training after injuring his neck in last weekend’s 3-1 warm-up loss to the United States but has since started full training.

“There is a lot of talk about the Germans talking us down and how well they are going to do and for us that is a positive.

“We are going into the game as underdogs and hopefully try to make our imprint on the game as soon as possible.”

Australia will be looking to build on their impressive performance from the 2006 World Cup in Germany when they finished second in their group behind Brazil and ahead of Croatia and Japan.

It took a penalty deep into injury-time for Italy to beat then coach Guus Hiddink’s side in the last 16 on their way to winning the final.

As for Germany, they have been largely untested since losing to Spain in the final of Euro 2008, but have a balance of promising talent and seasoned veterans, even without Ballack.

Germany, now captained by defender Philipp Lahm, also have a knack of coping well with the pressure of the knock-out stages and have won all four penalty shoot-outs they faced at previous World Cups.

“As far as I’m concerned, this German team is the best I’ve played in,” said Lahm.

And Werder Bremen centre-back Per Mertesacker said all German thoughts were fixed on a victory.

“I don’t want to be negative about it, but it would be a very bad start for us to lose the opening game to Australia,” he said.

“We need to get as many points as possible, as soon as possible under our belts.”

Germany’s wingers have promised to “tear apart” the Australian defence which enjoyed a sterling reputation in qualifying.

In Fulham goalkeeper Mark Schwarzer, the Socceroos have one of the world’s top shot stoppers, but even he would concede that he will probably have his work cut out against the likes of Mirolsav Klose, top scorer in the last World Cup.