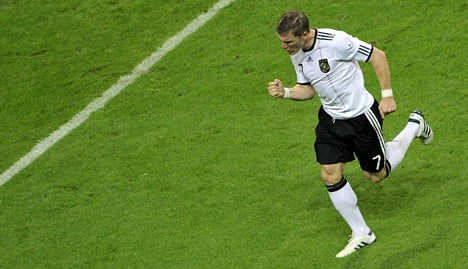 In recent months Schweinsteiger, who starred alongside Lukas Podolski on home soil in Germany’s run to the semis in 2006, has thrown off the reputation he once had of being of a immature. Since those heady days the pair have gone different ways at club level.

Whereas Podolski was unable to hold down a first team spot at Bayern Munich and left to return home to former side Cologne saying he “just wanted to be happy on the pitch” Schweinsteiger has in contrast gone from strength to strength at Bayern.

Gone are the constant changes of image – the different hair cuts and the gaudy clothes, as well as the black-painted fingernails. And he no longer is tempted by extra-curricular activities such as the time he memorably starred in an advert for a poultry firm in which he imitated a chicken.

That kind of thing does not impress Bayern’s tough Dutch coach Louis van Gaal and under his tutelage Schweinsteiger last season buckled down to become a mainstay of the Bayern midfield. It was a move of position which he said came at “a very important stage of

my career and in my personal development.”

Having outgrown the nickname “Schweini,” he promptly turned in the best season of his career and was rewarded with the league title and German Cup as well as a run to the Champions League final where Inter Milan proved too strong.

Schweinsteiger is now being called to take on more responsibility by Löw in the absence of Ballack in a German side which Lahm has judged as the best one he has been involved with and which has an average age of just 25. He is now one of the comparative veterans with his 74 caps and 21 goals scored.

He hopes that one day he can have a tilt at the 150 caps national appearance record held by 1990 World Cup winning skipper Lothar Matthäus.

“I want to take on more responsibility in this team – I shall demand more of the ball and try to influence our game to a greater extent,” he told reporters as Germany prepared to start their World Cup campaign against Australia.

The confidence that Van Gaal has instilled in him means he is now hoping to lead by example as Germany raise a new generation with the likes of Mesut Özil, Thomas Müller and Holger Badstuber bursting through.

Schweinsteiger said: “We can feel that these young players are hungry and have confidence in themselves. They believe they are capable of great things. “If we combine that with our experience we can really achieve something good.”