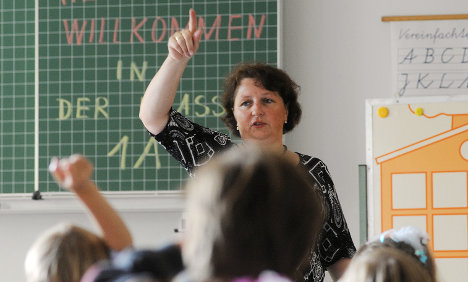 “Forced marriage is an infringement of human rights,” Maria Böhmer, the government’s commissioner for immigration and integration, said.

“Current mechanisms for helping young men and women threatened by forced marriage often come too late or not at all. Schools can play an important role here,” she said.

The guidelines aim to give schools and teachers concrete tips for picking up on early warning signs if a student is being pushed into a forced marriage, and on talking to parents and alerting child protection services.

With many girls forced into marrying someone chosen by their families too scared to come forward, figures are hard to come by. But support groups estimate that more than 1,000 forced unions happen every year in Germany.

Mostly the girls are Muslims, but not all. Often they are sent back to their parents’ countries of origin such as Turkey, Lebanon, Syria, Kosovo, Iran and Iraq to marry, and cannot return because they have no German passport.

Last month police reportedly intervened after a 15-year-old from Hamburg called Fatima called for help online and with her mobile phone, saying that she was being forced into a marriage by her Serbian family.

She subsequently changed her story and said that she had not been forced to marry, but the episode made the news and turned the spotlight on the issue of forced marriage among Germany’s large immigrant community.

Shortly afterwards it emerged that a 14-year-old Kurdish girl had been “sold” by her family for €15,500 into a forced marriage.

The girl is now pregnant and living with her parents again, reports said.

Chancellor Angela Merkel’s government is also responding with a bill banning the practice and imposing prison sentences for offenders that it hopes will be approved by lawmakers later this year.