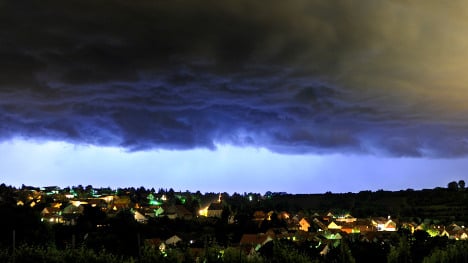 For the second night in a row, heavy rain and forceful winds uprooted trees and flooded streets in the states of Hesse, Rhineland-Palatinate, and Mecklenburg-Western Pomerania.

In Hesse alone the DWD measure some 15,000 lightning strikes between 11 pm and 2 am.

Frankfurt fire fighters were called to emergencies more than 150 times throughout the night – significantly more than the night before.

A tree fell on a petrol tanker truck injuring the driver in Walsberg, near Marburg.

Deutsche Bahn was forced to interrupt train service between Marburg and Kassel and elsewhere in the state due to storm damage to contact wires.

“Countless trees and branches fell on streets overnight and needed to be removed by daylight,” fire department spokesperson Hans-Jürgen Kohnert.

In Rhineland-Palatinate rain water stood some 60 centimetres high on the A6 motorway, sinking cars past their fenders, police reported.

The situation was similar near the Müritz lake in the state of Mecklenburg-Western Pomerania, with the addition of large hailstones and tornado-force winds, police there reported.

But the DWD said the weather should begin calming down after Friday.

“The ingredients for heavy storms have been around for the last few days and will remain on Friday,” said DWD meteorologist Bernd Zeuschner, adding that some 50 litres of rain per square metre and winds up to 130 kilometres per hour had been registered in parts of southwestern Germany on Thursday night.

The northeast and areas near the Alps in the south can still expect thunderstorms on Friday, he said, but the dark clouds will be mostly gone by Saturday save for localised storms south of the Danube River.

“The rest will enjoy much more comfortable air temperatures,” Zeuschner said in the DWD report. “Not only will the air be cooler, it will also be dryer and less humid.”

On Sunday the cooler temperatures – which will still average a pleasant 20 degrees Celsius – will also reach southern Germany, forcing the remaining stormy weather out.

“It’s shaping up to be a mostly very friendly mix of sun and clouds,” Zeuschner said, adding that there may be a few exceptions with showers in the north and southeast.