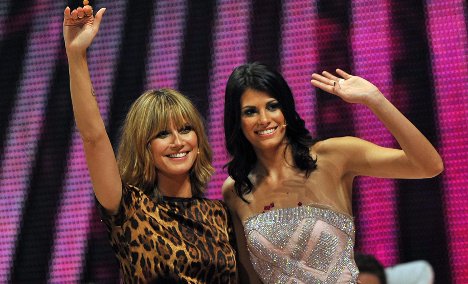 “In my eyes you are an excellent role model,” Klum told the Syrian-born Austrian at the ceremony in front of a crowd of 15,000, adding that the young woman had gained confidence during the course of the series.

“The shy girl now walks tall through the world,” the 37-year-old supermodel said.

Klum, dressed in a short leopard-print dress, said Alisar had a “classy” presence.

The 1.78-metre Mattinghofen resident was chosen above finalists Laura (23) from Düsseldorf and Hanna (18) from Wesel.

CLICK HERE FOR A PHOTO GALLERY OF THE WINNER.

The three-hour finale also included performances by pop stars Kylie Minogue and Katy Perry, but the real star of the show was reportedly the colourful and muscular 42-year-old Cuban catwalk trainer Jorge Gonzalez, who was greeted by loud chanting when he entered the arena in high heels.

According to broadcaster ProSieben some 23,000 young women applied to be on the show, but bloggers have called this season the most boring so far due to the contestants’ good behaviour, which ruled out cat fights.