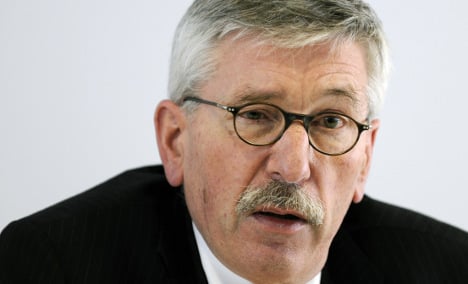 While addressing the southern Hesse business association on the theme of education, demography and societal trends on Thursday, Sarrazin said that the limited education of immigrants was endangering Germany.

“We’re becoming on average dumber through natural means,” he told the group.

Citing what he called ample statistics for proof, Sarrazin went on to say that in particular, immigrants from “Turkey, the Middle East and Africa” are less educated than those from other countries.

Additionally, immigrants have more children than Germans, he said, adding that this caused the “a different growth of population groups with different intelligence” because parents pass their intelligence on to their children.

Sarrazin’s remarks were reportedly met with smirks from the audience, but there were no verbal protests.

The 65-year-old, who served as Berlin’s finance senator before joining the central bank’s board, made national headlines last September when he made anti-immigrant remarks against Arabs and Turks in an interview with Lettre International magazine.

He claimed that “a great many Arabs and Turks in [Berlin], whose numbers have grown because of the wrong policies, have no productive function other than as fruit and vegetable sellers.”

Though he apologised for the remarks, Sarrazin refused to step down from the Bundesbank’s board despite pressure to do so. He was however symbolically punished when the institution stripped him of some responsibilities after the comments, which caused widespread outrage.