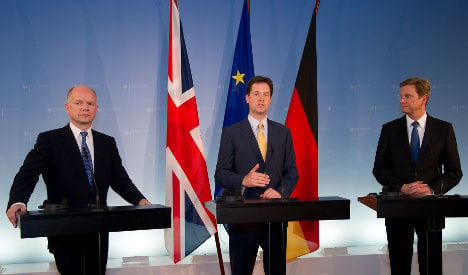 Will someone please translate for Hauge? Photo: DPA

“I find the famous Berlin fresh air very refreshing,” the Liberal Democrat leader told reporters in fluent German after talks with Foreign Minister Guido Westerwelle in Berlin, before talking up the importance of bilateral relations.

But perhaps to the relief of Clegg’s notoriously monolingual compatriots – he speaks five tongues – he was not completely at ease with the grammatical minefield that is the German language, quickly switching to English.

His efforts won him praise from Westerwelle, who famously told off a BBC journalist for asking him to answer a question in English last year, telling Clegg his German was “excellent.”

Clegg was on a visit to Berlin together with Foreign Secretary William Hague from the Conservatives, with whom Clegg’s party last month formed Britain’s first coalition government since World War II.

Hague said it was the first time that two cabinet ministers from the two different parties in the coalition had travelled outside Britain together.

“[This] is the first time in the lifetime of anybody in this room that this has happened. So it is important for our good relations with Germany, but it is a small piece of history,” Hague said – in English.