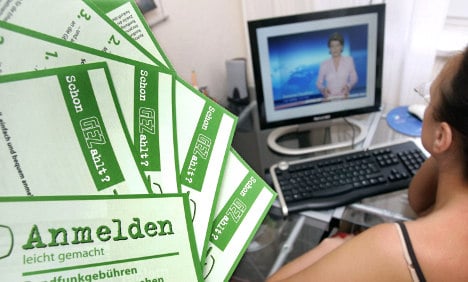 The previous system, which required fees for each television set or radio, will be reformed to a flat household rate of €17.98 per month, head of the federal states’ broadcasting commission and Rhineland-Palatinate premier Kurt Beck told reporters on Wednesday evening.

Fees for businesses will be graduated depending on their size.

If all goes according to plan, the states will sign an official agreement in December, and the new rule would go into effect on January 1, 2013, he said, calling the decision a “milestone.”

It’s a difficult task for the organisation’s 1,100 employees, and consumers frequently bring cases against the GEZ to court.

But now there will be a “significant simplification,” relieving families of high fees, Beck said. He also said that while he did not expect complete restructuring within the GEZ, the fee simplification would reduce internal costs.

He said the reform was necessary because televisions and radios are no longer the only relevant devices for using public broadcasting services. Now each household will pay one fee regardless of how many devices it owns, including those that have none. But Mappus said it was likely there were very few device-free households in Germany.

ARD head Peter Boudgoust said in a statement that the new system would make things “easier and more comprehensible.”

Radio broadcaster Deutschlandradio director Willi Steul said in a statement that the model will create a chance to “raise the acceptance of the broadcaster fee.”

But the pro-business Free Democrats, who had advocated fees for individuals instead of households, were critical of the reform.

The party’s parliamentary group speaker on media Burkhardt Müller-Sönksen said it would endanger jobs and was and “ineffectual development of the current GEZ fees.”