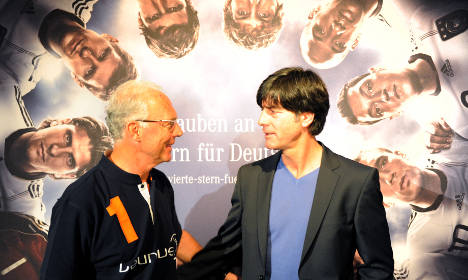 Beckenbauer and Löw at a recent press conference. Photo: DPA

Beckenbauer captained the 1974 team to World Cup success on home soil and then coached the side which won the Italia 1990 title.

With captain Michael Ballack out, Germany coach Joachim Löw has handed the captain’s armband to defender Philipp Lahm, who takes over a relatively inexperienced side packed with potential.

Both Bayern Munich’s Thomas Müller, 20, and Holger Badstuber, 21, were playing reserve football only last August, yet have both won their first caps and played in a Champions League final.

The defensive midfielder role vacated by Ballack’s injury is likely to be filled by Stuttgart’s Sami Khedira, 22, while the dazzling skills of Mesut Özil and Marko Marin, both 21, could play havoc with defences.

The 64-year-old Beckenbauer visited the German squad at their World Cup base on Wednesday and said Lahm’s side can reach at least the last four.

“You can see it in their body-language and in the warm-up games, the Germans are enjoying their football and it is a good sign,” said Beckenbauer with the current squad having an average age of just 25.

“I hope we can at least reach the semi-finals. Of course, you need a little bit of luck and not just skill.”

Löw has said his young team can cope with the expectations on their shoulders in the high-pressure environment of a World Cup.

“You can’t prepare players for the situations they will face,” he said. “In such situations, even experienced players can fail. But we have done a lot of work on our system, the young players are talented and can go with confidence into the tournament. Experience plays only a slightly secondary role, the decisive factor is their quality.”

Under Dutch coach Pim Verbeek, Australia are expected to give Germany a hard test when the two sides begin their World Cup campaign in Durban on Sunday.

“They are incredibly well-organised on the pitch and their defence is almost perfect,” said Löw. “They are also incredibly powerful, it will be hard to beat them.”

But Löw insists Germany will not be playing for the draw.

“The target is to win. We want to be proactive and play an attacking game,” he said.