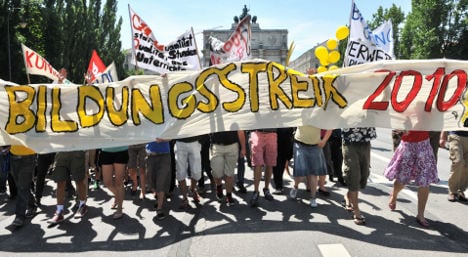 An estimated 70,000 people took part in demonstrations in 40 cities to demand better conditions at German schools and universities, including an end to budget cuts and college tuition.

The protests come one day before state and federal officials meet in Berlin to discuss better funding for education and scientific research.

According to the police, around 1,000 people marched through the centre of the German capital, carrying banners reading “Money for Education, not for Banks.” Protestors in the state of Hesse attacked the state government’s plan to cut some €30 million from higher education and €45 million from schools this year. In the southwestern city of Freiburg, hundreds of student protestors briefly occupied part of the main train station, causing disruptions to rail traffic.

German students have protested regularly for more than a year to highlight what they consider the dire state of the country’s educational system.

Many university students are also unhappy about reforms implementing bachelor and master degrees at German universities in recent years.