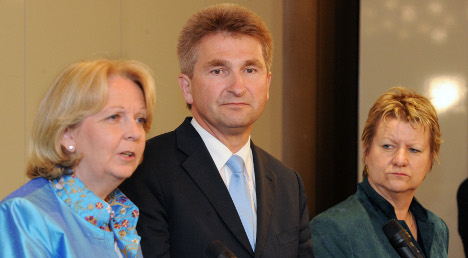 A full month after the state voted, leaders emerged from lengthy talks Tuesday night with a mood of optimism, prompting hopes the stalemate over who will govern NRW will finally be resolved.

“There were positions on which there was definite movement,” said centre-left Social Democrats leader, Hannelore Kraft, after the meeting that lasted seven-and-a-half hours.

Pro-business Free Democrats leader in the state, Andreas Pinkwart, told broadcaster Deutschlandfunk he was pleased with the talks, though it was too early to confirm that a coalition would form.

Discussions had been good and focused, though there was still much to be decided, he added.

Talks between the SPD and the conservative Christian Democrats (CDU) to form a so-called “grand coalition” in the state ended without an agreement last week, leaving the “traffic light coalition” – named for the parties’ colours of red, yellow and green, as the best hope for an end to the standoff.

Voters delivered a clear rebuff to the governing CDU in the election last month, effectively ending the reign of conservative premier Jürgen Rüttgers while also sending a clear signal of dissatisfaction with Chancellor Angela Merkel’s performance.