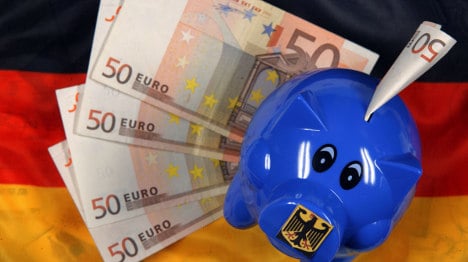 After an intensive, two-day cabinet session, the coalition government of Chancellor Angela Merkel’s centre-right coalition has decided to slash €80 billion from the budget by 2014, including €11.2 billion next year.

The axe will fall hardest on welfare, with savings adding up to more than €30 billion over four years.

While the maximum monthly payment for new parents known as Elterngeld will remain at €1,800, there will be a modest cut to the rate for people on net incomes of more than €1,240 a month, from 67 percent to 65 percent. The targeted saving is €200 million a year.

The present €300 per month Elterngeld for recipients of unemployment benefits will be scrapped completely. That aims to save €400 million per year.

People shifting from regular unemployment insurance to long-term jobless benefits now get an extra payment of up to €160 a month for singles or €320 for married recipients for the first year and half these amounts for the second year. These bonuses will be abolished, saving €200 million a year.

The biggest saving will come from giving the Federal Employment Agency more discretion, allowing it to make decisions about unemployment support and re-integration programmes. This aims to make the management of the long-term unemployed more efficient. Savings are estimated at €4.3 billion in the first year, rising to €10.2 billion in 2014.

For recipients of long-term unemployment benefits, or Arbeitslosengeld II, the government will slash the rates of pension insurance, saving €1.8 billion a year.

The heating allowance for recipients of government accommodation benefits will also be slashed, saving €100 million a year.

The “ecological air traffic tax” would be imposed on all passengers departing from German airports, and would be levied on criteria such as price, noise and consumption. It could be introduced by including air transport in agreed carbon emissions trading standards and would aim to raise €1 billion a year from 2013.

The structure of the German military will be scrutinised with the aim of saving €2 billion a year from 2013. A special commission set up by Defence Minister Karl-Theodor zu Guttenberg will look at how to cut military staff by 40,000 to about 210,000.

Energy firms will pay a new tax on profits derived from the extension to the lifespan of nuclear power plants, raising €2.3 billion a year between 2011 and 2014.

The German rail operator will pay a new dividend on its profits, which the government hopes will deliver €500 million a year.

A tax on financial transactions would be introduced from 2012, involving an agreement with European and international partners, and would raise €2 billion a year. Merkel said the chances that neighbours would agree to a European-wide levy were “not bad.”

About 15,000 jobs will be cut from the public sector by 2014. The rest of the bureaucracy faces an effective 2.5 percent pay cut, with the abandonment of the planned raise in the Christmas bonus in 2011, saving €800 million a year. Overall, cuts to the public service will save €13.4 billion over the four years.

Exemptions from the environmental tax would be slashed, notably for energy-intensive industries. This would raise €1 billion next year.

The government’s previously announced plan to boost spending on research and development by €12 billion by 2013 remains in place.

The reconstruction of Berlin’s historic city palace will be put on hold at least until 2014, saving the federal government €440 million. The plan will be revived when the money is available.