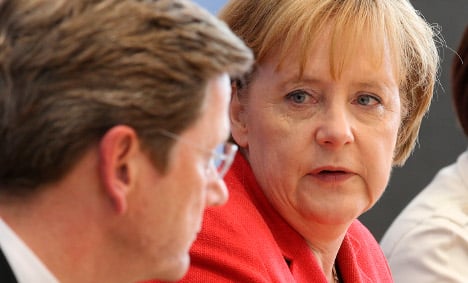 After an intensive, two-day cabinet session, the coalition government of Merkel’s Christian Democrats (CDU) and the pro-business Free Democrats (FDP) decided Monday to slash €80 billion from the budget by 2014, including €11.2 billion next year, much of it from social benefits.

“We came up with a package that justly divides the burdens and simultaneously aims for growth and employment,” she told daily Passauer Neue Presse.

“With this budget we’re achieving a fiscal foundation with which we can more strongly move through the crisis,” Pofalla told daily Rheinische Post, referring specifically to the €12 billion that will still be invested in research and education as planned before the budget negotiations.

Pofalla also said he saw no social inequity in how the cuts were shared out.

Meanwhile the Paritätische Wohlfahrtsverband, an organisation dedicated to social justice, accused Merkel’s coalition of insensitivity over its cuts to social benefits, which Merkel called “painful” on Monday.

The German Association of Cities said it feared the new budget would create additional burdens for already struggling communities.

“Budgetary consolidation is necessary, but a conflict arises when the government cuts things in some areas and the communities have to make up for it,” leader Stephan Articus told daily Neue Osnabrücker Zeitung.

Some within Merkel’s own party said they had their doubts.

Karl-Josef Laumann, Labour Minister for the most populous state of North-Rhine Westphalia, said there should have been tax increases for the rich to even out the cuts to social benefits.

“If one had included the higher incomes then the entire package would have been more well-rounded socially,” he told daily Hannoversche Allgemeine Zeitung.

Laumann, who is also leader of the Christian Democratic Employees’ Association (CDA), questioned changes to unemployment benefits, calling the issue “delicate” and adding that such changes could increase costs for cities.

“That wouldn’t make much sense,” he said.

But the head of the Munich-based Institute for Economic Research, (Ifo) Hans-Werner Sinn, said he believed the package was just.

“In my opinion it is balanced,” he told daily Rheinische Post. “One can’t distribute money one doesn’t have.”

The new plan was generally unpopular with the opposition and unions, media reports said.

General Secretary for the centre-left Social Democrats Andrea Nahles told broadcaster SWR that the austerity measures were “extremely cowardly,” because the needy would suffer while “those who caused the crisis are spared.”

“This failed savings package will not go without an appropriate answer from the unions,” Sommer told daily Rhein Neckar Zeitung. “We will also mobilise against the cuts to civil service jobs.”

“The strong shoulders aren’t being burdened, but instead the weak,” he added.