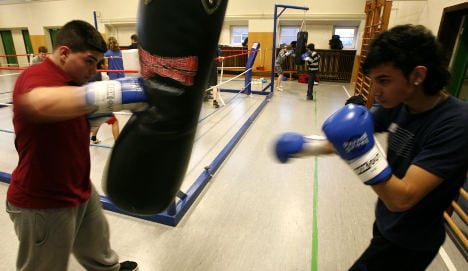 Controlled violence - boys at a boxing club in a Hamburg school. Photo: DPA

The study, which involved intensive questioning of 45,000 teenagers from 61 towns and regions across the country, was conducted by Christian Pfeiffer of the criminal research institute of Lower Saxony.

Pfeiffer said he was dismayed by the results, and told the Süddeutsche Zeitung he was a strong critic of political campaigns which painted foreigners as criminals – such as those led by Roland Koch and Thilo Sarrazin.

Pfeiffer’s work took into account the level of education and standard of living in the families of the children – aged between 14 and 16 – who were questioned. He also asked them how religious they considered themselves, and how integrated they felt in Germany.

Pfeiffer said that even when other social factors were taken into account, there remained a significant correlation between religiosity and readiness to use violence. There were some positive correlations too he said, noting that young religious Muslims were much less likely than their non-Muslim counterparts to drink alcohol – or to steal from shops.

The increased likelihood to use violence was restricted to Muslim boys Pfeiffer said – Muslim girls were just as likely to be violent as non-Muslim girls.

This led him to conclude that there was not a direct link between Islamic belief and violence – but an indirect one. He pointed to Christian teachings which justified domestic violence and male dominance of society for a long time.

His researchers asked the teenagers a range of questions about their ideas of manliness, for example whether they thought a man was justified in hitting his wife if she had been unfaithful. They also asked about what media and computer game violence they were exposed to, as well as whether their friends were involved in crime or violence.

The results showed that Muslim boys from immigrant families were more than twice as likely to agree with macho statements than boys from Christian immigrant families. The rate was highest among those considered as very religious, Pfeiffer said. They were also more likely to be using violent computer games and have criminal friends.

Added to that, the more religious Muslim boys felt the least integrated into German society, with only 14.5 percent of the very religious Turkish boys (the largest group of Muslims in the study) saying they felt German, although 88.5 percent had been born here.

Pfeiffer said he thought the responsibility for the macho culture lay with Imams in Germany, who he said usually come from abroad and often cannot speak German or have much understanding of the culture.

“We have to prevent attempts at integration from being destroyed by Imams who preach Turkish provincial stories and a reactionary male image,” said Pfeiffer.

He also called for Germans to reconsider how they treat Muslims, saying that since the September 11 attacks in 2001, there had been a damaging loss of trust.

“Exclusion starts already when the Muslim child is not invited to a birthday party,” he said.