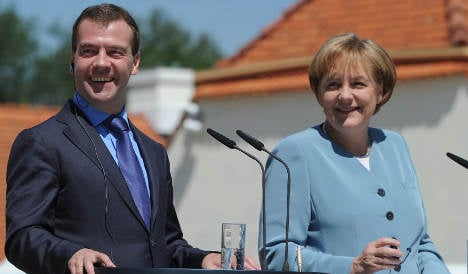 Speaking at the end of two days of meetings in Meseberg near Berlin, Merkel said the two countries would be working together on the matter.

“This is a joint position,” she said. “Concern about the Iranian nuclear programme is growing.”

The UN Security Council could soon decide on sanctions if Iran rejects an offer of help in enriching nuclear material for power generation, in return for closing its own enrichment operations.

Medvedev said an international consensus on the matter was important. “Either we all stand together or we drift off in different directions, and that would be wrong,” he said.

He said it would nonetheless be best to reach agreement with Iran without having to impose sanctions. “We hope that the Iranian leadership will listen to the voice of the international community,” he said.

On other matters, Merkel also assured Medvedev she would work on the issue of visa-free travel between the European Union and Russia.