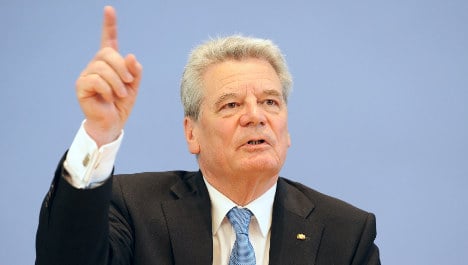 Former FDP presidential candidate Hildegard Hamm-Brücher told Der Spiegel she was disappointed that in such a difficult time, it had not been possible to settle on a candidate that all parties supported.

Gauck, who has been nominated by the Social Democratic Party (SPD) and the Greens, enjoys cross-party affection and respect – he was a civil rights activist in East Germany and was the first administrator of the communist country’s secret police files after the fall of the Berlin Wall.

He is considered an upstanding, moral man whose work enabled those spied upon by the East German secret service to see their files. He has said he would be happy to be president but would not campaign for the job.

Jörg Schönbohm, former head of the CDU in Brandenburg has expressed his support for Gauck.

“I ask myself why it was not possible in the conservative camp to agree with the SPD on Gauck,” he told Der Spiegel magazine.

Doubts have also been expressed in the eastern FDP parties in Saxony and Saxony-Anhalt, while the CDU head in Mecklenburg-Western Pomerania described Gauck as an outstanding personality – despite making assurances that he would follow party lines and vote for Wulff.

Cem Özdemir, head of the Greens, appealed to CDU, CSU and FDP members not to simply follow their leaders.

“Follow your hearts, not party discipline, don’t follow the chancellery but rather what is good for our country, and that is Joachim Gauck,” he said on Saturday during a Green party rally in Mainz.

A rebellion in favour of Gauck would have to be considerable to have an effect and Hermann Gröhe, CDU secretary general said there would be no doubt of the outcome.

He said the Union and FDP had a majority of 21 in the national assembly – made up of MPs and representatives from the states – which will vote on June 30,