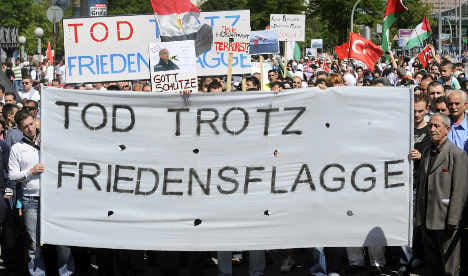 The demonstration marched through the city centre, many waving Turkish flags, after the council of the Islamic Society in the city called for people to show their support for Gazans and those who tried to break Israel’s blockade of the strip.

Demonstrators shouted slogans calling the Israeli military murderers and demanding that the blockade of the Gaza Strip be lifted.

Nine people are known to have been killed during the Israeli military boarding of a Turkish boat which had been part of a convoy taking aid to Gaza.

The ship was raided in international waters, an act which has provoked outrage around the world and most seriously damaged Israeli diplomatic relations with Turkey.

The British Guardian daily paper reported at the weekend that Turkish post-mortems on those killed showed many had been shot several times, including in the head.

The Israelis argued that their forces were attacked when they boarded the boat, and say the blockade of the Gaza Strip is necessary to limit the rocket attacks launched from the area, which is ruled by the terrorist grouping Hamas. The blockade has led to terrible humanitarian conditions for those living in Gaza.

Eleven Germans, including MPs for the socialist Left party, Inge Höger and Annette Groth as well as former MP Norman Paech, were on the convoy, which had been organised by the group ‘Free Gaza’.

One German was injured in the raid and received treatment in Tel Aviv after he and the others on the boats were taken to Israel. Three of the five Germans so detained were released on Wednesday and extradited from the country.

One further aid ship, sailing under an Irish flag, was on Saturday stopped by the Israeli marines as it tried to reach Gaza. No violence was reported.

The boat – called Rachel Corrie after an American activist killed when trying to stop houses being destroyed in the Gaza strip by the Israeli forces – was carrying around 1,200 tonnes of aid, with a group of around 20 activists including Northern Irish Nobel Peace Prize winner Mairead Maguire.