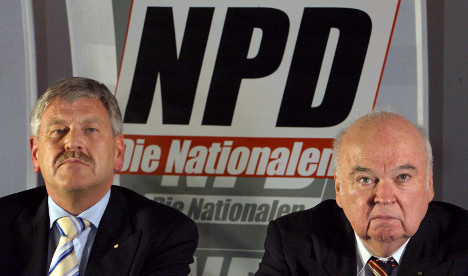 The National Democratic Party (NPD) and the German People’s Union (DVU) are sounding out their members about a possible merger, sources at the NPD’s party conference in Bamberg told daily Tagesspiegel.

Both parties are facing dire problems with falling membership and financial struggles, particularly the DVU, which probably needs the merger to avoid oblivion, the paper reported.

According to the domestic intelligence service, the Bundesamt für Verfassungsschutz, the NPD has about 6,800 members and the DVU about 4,500.

At the beginning of 2005, the parties had formed a loose alliance called the Deutschlandpakt, but the NPD dissolved this about a year ago. The NPD ran in the state election in Brandenburg in September last year, and helped drive the DVU to its worst ever electoral drubbing.

Neither party ended up clearing the 5 percent hurdle needed to win seats in the parliament. The DVU had not recovered from this blow, the paper said.

The NPD has had electoral success in some state parliaments and holds seats in Saxony and Mecklenburg-Western Pomerania, though it has gone backwards in recent elections.

It was fined €2.5 million for funding irregularities last year. There have also been periodic calls to ban the party, with the latest being led by Bavarian Interior Minister Joachim Herrmann.