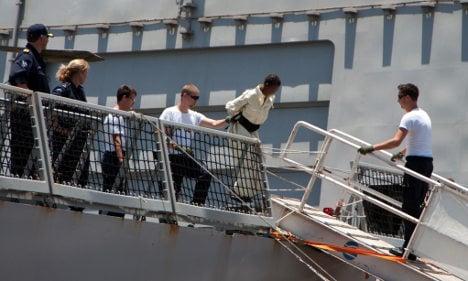 “Extradition is agreed for all the people sought by Germany,” a spokeswoman for the court in Amsterdam, told AFP.

She said that no appeal would be allowed against the ruling and the suspects, arrested by the Dutch navy in April after an attack on a German cargo ship off the Somali coast, would be sent to Germany within the next ten days.

At a hearing last month, the Somalis had pleaded with the Dutch judge not to send them to Germany.

Defence lawyers had argued that the ship attacked had been registered in the Bahamas and not in Germany as claimed.

On April 5, after an exchange of gunfire, the Dutch frigate Tromp freed the freighter Taipan that had been targeted by pirates about 900 kilometres (560 miles) east of the Somali coast, and arrested 10 suspects.

The 15 crew members, who took refuge in a protected area of the ship, were all unharmed, but a Dutch soldier was lightly wounded in the operation.

The suspects were flown to the Netherlands in April from Djibouti, after Germany issued European arrest warrants for them.

Another Dutch court, in Rotterdam, is to hand down judgment on June 16 on five other Somalis, aged between 22 and 44, whose boat was intercepted by a Danish frigate in the Gulf of Aden on January 2 as they were allegedly preparing to board the Dutch Antilles-flagged Samanyolu.

Prosecutors have sought seven-year jail terms for the five, who said they had approached the Samanyolu for help with their hands in the air after their boat developed engine trouble and they ran out of food and water at sea.

According to the prosecution, however, the Danish frigate caught them as they prepared to board the Samanyolu after attacking it with automatic weapons and rockets.

The trial was the first to be held in Europe of suspected Somali pirates, who have attacked hundreds of ships in the region to hold them to ransom.