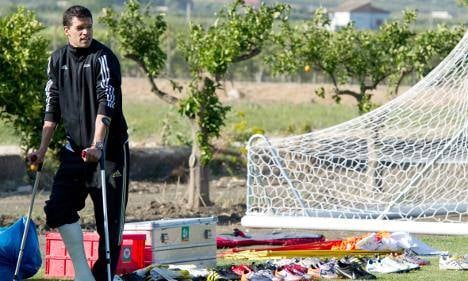 Ballack damaged ankle ligaments playing for Chelsea in last month’s FA Cup final and will miss the World Cup in South Africa with Bayern Munich defender Philipp Lahm captaining the side in his absence.

The 33-year-old Ballack has said he intends on playing on until at least the next European Championships to be held in Poland and the Ukraine, but Hoeneß has advised him to realise now is the time to quit.

“Even if he is a little bitter, you have to recognise when enough is enough,” said Hoeneß, who won 35 caps for Germany in the 1970s, in German magazine Sport Bild.

“I don’t think it is wise to see the European Championships of 2012 as a major objective.”

Hoeneß said Ballack’s bitter disappointment of missing his third World Cup finals is understandable, but does not see Euro 2012 as an enticing proposition, especially as Ballack will be nearly 35.

“If it were a World Cup, I would understand it,” said Hoeneß. “But Euro 2012 in Poland and the Ukraine is not exactly the sort of dream event which keeps me awake at night with excitement.”

But Ballack, who played for Bayern Munich before joining Chelsea, seems to be set on returning to football once he has got over his injury.

“In the new season, I’ll be back to playing again,” said Ballack. “I must come back healthy, that’s the most important thing. The injury could well be a motivation to set the Euro 2012 as my new goal. I don’t want pity, I just want to look ahead.”

“Euro 2012 for him is certainly feasible. Age is not important, “said Bierhoff, who played 70 times for Germany and played in the 2002 World Cup final at the age of 34.