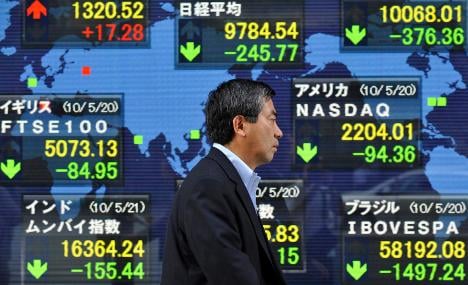 The orders were more than ten times the Osaka exchange’s average daily volume and one of the largest trading errors in Japan, prompting regulators to begin an investigation.

After the orders were placed, the Tokyo Stock Exchange’s Nikkei-225 futures index lost 110 points or one percent, reports said.

“There was a software glitch in our automated trading system, and the consequence of the error was that a number of trades were repeatedly sent to the exchange,” Deutsche Bank spokesman Aston Bridgman said Wednesday.

“The error was recognised and we immediately placed cancel orders on 99.7 percent of the trade. There is an issue somewhere in the software that needs to be identified,” he added.

The remaining orders that were executed amounted to 55 billion yen, he said. The bank’s proprietary trading unit has its own trading platform and software, although the spokesman declined to provide details.

Tokyo stock markets went into turmoil in December 2005 after a Mizuho Financial Securities trader punched in an order to sell 610,000 shares in a telecom firm at one yen each instead of one share at ¥610,000.

The chaos prompted the resignation of the head of the Tokyo Stock Exchange to take responsibility. A court last year ordered the TSE to pay compensation of more than $120 million over its failure to stop the blunder.