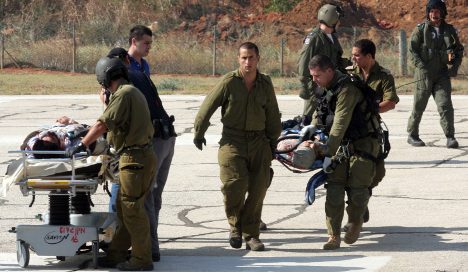 The man’s condition, and the precise extent of his injuries, were not immediately known, Foreign Ministry spokesman Andreas Peschke said, though he added that German embassy officials had brief contact with the 42-year-old from North Rhine-Westphalia, who is being treated in an Israeli hospital.

The man was wounded when the Israeli military stormed a boat in international waters and opened fire, killing at least nine people, in an incident that has provoked shock and outrage around the world.

The Israeli military says the soldiers were attacked, though this is disputed by Free Gaza activists and by German MPs from the socialist Left party who were on board the flotilla. The flotilla had intended to deliver aid to Gaza, which is under a blockade imposed by Israel.

The German man was being treated at a hospital outside capital Tel Aviv. Meanwhile, three of the five Germans detained after the military operation were released on Wednesday, Peschke said. They were taken by bus to Tel Aviv airport.

German embassy officials were endeavouring to secure the release of two further German citizens being held in a prison in the city of Beersheba.

By Wednesday afternoon, 449 foreign nationals of various nationalities had been deported, according to the Israel Prison Authority.

Peschke said it was still too early to judge whether international law had been broken, owing to the differing versions of events put forward. However, he said the incident seemed to have occurred in international waters, meaning the Law of the Sea Convention applied.

This United Nations agreement permitted the capture of other vessels only in exceptional cases, such as following a UN resolution or in the case of ships that were not registered with any nation. Although Israel was not formally signed up to the agreement, it was nevertheless bound by its rules.

Therefore, it had to be asked whether the principle of proportionality had been adhered to by the Israelis in carrying out their operation, he said.