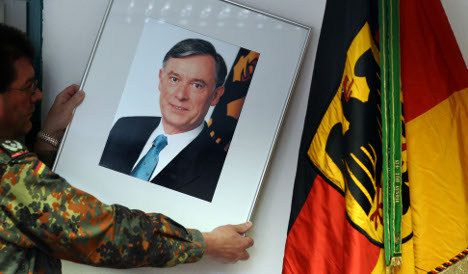 And so, a great misunderstanding ends in catastrophe. Germany’s president has resigned, suddenly, with immediate effect, as if he’s throwing in the towel. This ensures Horst Köhler his place in the history books, although it’s certainly not how he intended to become unique in the annals of the Federal Republic.

His actions cannot be explained by thin skin and pride alone. What might appear to have been a spontaneous decision, one made in the heat of the moment, is actually totally logical. It comes from the complete estrangement of this president from large swathes of the so-called political elite – which he always almost coquettishly refused to join.

Also because, having never previously held an elected office, he always served the body politic as a civil servant. As an administrator. He did not have, at times spectacularly, the instincts for knowing the right time to intervene in the national discourse. Imagine if this president had been forced to make one important existential decision. Doing so qualifies any sorrow – if there is any – over his resignation.

What someone in the mould of the Richard von Weizsäcker would know in their sleep, Köhler could and did not want to understand. Moreover he still is unable to make a rousing speech even six years after taking office. That a great majority of the public likes him is thanks to the fact that he, more than anyone else, tried to get close to the people. He reduced the distance between the people and the head of state. But this had the side-effect that with his words and actions he also commanded less respect. What he said was often banal, or too late, or excessive – or simply wrong.

Choosing Köhler back in 2004 despite all doubts appeared to be a sovereign and clever masterpiece by the Christian Democrats and Free Democrats. Today it simply shows the lack of competence Chancellor Angela Merkel’s coalition has in making appointments for sake of the office and not just for tactical advantage. This misunderstanding was continued with Köhlers re-election last year, which was supposed to be a demonstration of power and unity.

That said, after that first period in office, the centre-right allies already knew better but they obviously thought it was not so important. That was another poor estimation – especially since the highest political office in the land is important – as important as the president is considered to be. And it becomes even more important when the government exhibits leadership weaknesses that cannot be ignored. The lack of respect was mutual.

Germany is currently experiencing four unprecedented challenges. First: Never has a federal government gotten off to a worse start and yet also failed to improve over the months. The country is being governed into irrelevancy.

Second: Never have Germany and its chancellor been more isolated and poorly regarded in Europe. This is particularly true in France, the other half of the European engine.

Third: Never has a foreign minister and vice chancellor been less influential or so unpopular.

And now the fourth exceptional challenge is plopped upon the country following the president’s resignation. Germany looks destabilised – and of all times during the greatest crisis of the last 60 years. This may not yet be discernable everywhere, but it will become very real after the government presents its grim budget.

The crisis, everyone is hoping, will bring forth a saviour. But the government must look hard to find one. It must this time make a wise, not petty-minded decision that is not oriented around the political balance of power in order to minimise damage to the nation. That is the priority now. The politicians must now look for a non-partisan presidential candidate, male or female, who will be supported by broad majority of population. Someone who can begin repairing Germany’s image in Europe and the wider world.