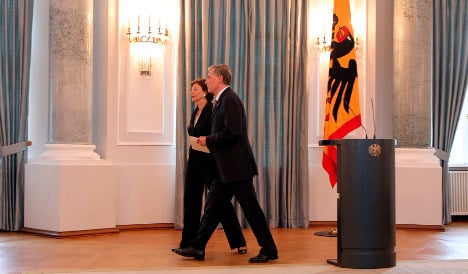 Germany’s largely ceremonial head of state resigned after saying he had been unfairly criticised for supposedly linking economic interests with the country’s military deployments abroad.

The first time a German president has left office in such abrupt fashion and just one year into his second term, Köhler leaves Chancellor Angela Merkel’s centre-right coalition with a massive political headache when it can least afford one.

Though the outgoing president had little political power, his departure is a heavy blow for Merkel’s conservative Christian Democrats (CDU) and their allies the Free Democrats (FDP), since Köhler was considered the coalition’s symbolic figurehead.

Already under fire for her handling to the eurozone debt crisis and the rocky start to her new government, Merkel now has to find a presidential candidate able to counter the impression Germany is falling to pieces in times of crisis.

The nation’s newspapers on Tuesday explored the episode’s ramifications for both Berlin and Köhler’s legacy as president. Many commentators said someone so thin-skinned was probably not the right person for the job.

The conservative Frankfurter Allgemeine Zeitung said it was remarkable Köhler would quit over nonsensical claims he was trying to justify economic wars.

“Can it be that Köhler actually resigned over stupid talk? Probably much more important was the fact that no one of importance came to his defence,” the paper wrote. “His actions show just how fed up and wounded the president already was.”

The FAZ said his resignation had turned Köhler into a “tragic figure,” who had actually won widespread acceptance among average Germans. But despite being chosen for the job by Merkel in the kitchen of FDP boss Guido Westerwelle, he always seemed out of step with their centre-right coalition.

“Köhler’s political isolation at the end must have been so dramatic that he could only help himself with an act of desperation,” the FAZ wrote.

The centre-left Süddeutsche Zeitung said Köhler had unnecessarily toppled himself.

“He threw away the highest office in the land because he felt insulted,” the paper wrote. “He will now go down in history as the only president who resigned.”

The Munich based daily said Köhler’s successor should be someone who doesn’t confuse himself with the presidency, saying the former head of the International Monetary Fund was clearly overwhelmed by his duties.

Suggesting German Finance Minister Wolfgang Schäuble as the right man for the job, the Süddeutsche Zeitung said the next president “should be a politician with the poise and courage to disagree and who sticks around when things get difficult.”

The right-wing daily Die Welt lamented that Köhler had deserved a better end to his political career.

“He wanted to be the president of all Germans with all his heart and soul. He travelled the country with unflagging verve,” the paper opined. “But in the end he must have realised he was sitting in the wrong place. Hopefully the politicians in Berlin will emerge wiser from this debacle.”

But Die Welt said both Germany and Köhler would have been better off if he had willingly forgone a second term: “Maybe Horst Köhler was puzzled by the powerlessness of his office. He often failed to hit the right tone and he failed to rely completely on the power of the spoken word,” the paper said. “He wasn’t political enough and those that put him in the Bellevue Palace coldly let him fall.”

The leftist daily Die Tageszeitung said Köhler’s resignation laid bare the desolate state of Merkel’s government and that there had to be more to the president’s decision to quit than simply being insulted by public criticism.

“What does this resignation mean? First of all it’s a sign of Köhler’s emotional and nearly apolitical attitude toward the highest office in the land,” the paper wrote. “This lack of respect for the office is one reason this resignation leaves one so speechless.”

But the paper also took aim at Merkel’s “black-yellow” coalition of Christian and Free Democrats.

“Köhler’s unprecedented departure is the latest and strongest symptom of the black-yellow disintegration,” the paper opined. “The coalition’s policies appear unrealistic and outdated in the context of the historic crisis we find ourselves.”