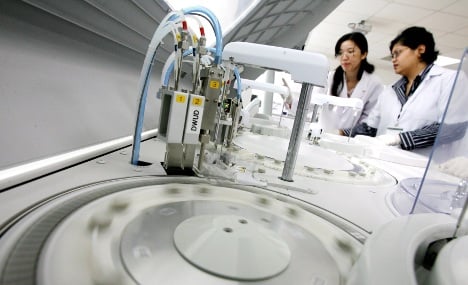 Immunologist Olaf Rotzschke, who has been working in the Southeast Asian island nation for two years says the modern equipment in his laboratory is “much better” than back in Germany, while there is also less bureaucracy and more money.

“I wouldn’t even be able to begin the experiments I do here,” he said.

The wealthy city-state invests some three percent of its gross domestic product (GDP) in research and development, a goal Germany has set for 2015, but not before intense bickering among politicians.

Rotzschke is one of some 200 German researchers now working in Singapore, and works for a state-run outfit called A*STAR, where instead of hustling for new funding, he concentrates on research with a bigger staff in a top-notch laboratory, he says.

The immunologist attributes the positive environment to a different attitude toward science in the country, where more students are encouraged to go into the field.

Biology professor Christoph Winkler, who came to the country three years ago with his family when he couldn’t find a position in Germany, gushes over better payment and “fewer hierarchies.”

Doctoral candidate and Mainz native Bernd Willens is on a four-year government fellowship.

“Singapore just has the money,” the 29-year-old says. “You’re more at the centre of the research.”

In just a few decades, the densely populated island went from developing country to an international financial and industrial centre that is known for being safe and wealthy.

The German scientists said they were willing to even deal with Singapore’s draconian penal system, which discourages homosexuality and levies hefty fines for offences as minimal as throwing chewing gum on the street, given the benefits.