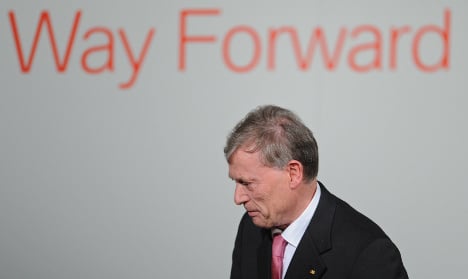 A former head of the International Monetary Fund and the European Bank for Reconstruction and Development, Köhler, 67, was elected to the largely ceremonial post of president in 2004 and re-elected almost exactly a year ago.

The German president, who serves as a sort of moral arbiter for the nation, welcomes visiting heads of states and signs government bills into law, but Köhler frequently used his position to make statements on topical subjects.

And he did not mince his words. In 2008, he hit the headlines by attacking banks for allowing financial markets to become a “monster” that he said nearly caused a global collapse. He also lashed out at overpaid bankers.

He had earlier risked controversy after Germany hosted the football World Cup in 2006 by saying that flying the national flag was a sign the country was “returning to normal” after decades of shame over its Nazi past.

But his latest comments – interpreted as referring to the highly sensitive topic of Germany’s military involvement in its unpopular mission in Afghanistan – provoked a maelstrom of criticism he felt he was unable to withstand.

In a radio interview on May 22, returning from a visit to Afghanistan, he said that for export-oriented countries such as Germany, “in emergencies, a military deployment is necessary to protect our interests.”

He later said his remarks were not intended to refer to Afghanistan, where Germany has 4,350 troops as part of an international force battling the Taliban, but he returned to a torrent of criticism.

In a tearful resignation speech that caught political Germany off guard, he´said he was stepping down immediately, expressing regret that his comments on such an “important and difficult” topic could have lead to misunderstanding.

It marked a spectacular end in politics for a modest and unassuming man, who, when he was first elected, was greeted by the tabloidy daily Bild with the headline “Horst Who?”

During his campaign for election in 2004, the married father-of-two, a political ally of Chancellor Angela Merkel, said he “doesn’t want to be a Rambo” but simply “the president of every German.”

Köhler’s early life was certainly anything but uneventful.

The seventh of eight children, he was born in 1943 in Skierbieszow, Poland, which the Nazi regime was trying to populate with Germans. His parents had fled there from Romania as it surrendered territory to the Soviet Union.

In the face of the Red Army’s advance, the family fled again to the region near Leipzig in eastern Germany.

Coming late to politics, he joined the Christian Democratic Union in 1981 becoming a close ally of former chancellor Helmut Kohl.

In 1990, Kohl named him to the Finance Ministry to replace Hans Tietmeyer after the latter was named Bundesbank chief, putting Köhler at the centre of German monetary reunification on July 1 of that year.

In 1998, he was appointed head of the European Bank for Reconstruction and Development (EBRD), helping guide the institution to concentrate on loans to small and medium-sized companies. Two years later he moved to the IMF.