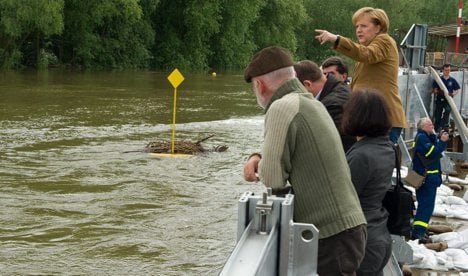 Merkel told reporters that efforts to improve flood prevention in Brandenburg in the last decade had paid off “unbelievably.” Surveying the anti-flood measures from the top of a bulkhead, Merkel said there was “a very, very well-rehearsed organisational structure” in place. “I have the impression that everyone worked under extreme pressure,” she added.

Visiting the small town on the Polish border with Brandenburg state premier Matthias Platzeck, Merkel also thanked the emergency services and local volunteers for their work this week.

The chancellor visited the local headquarters of the disaster-protection and rescue services before climbing a protective bulkhead. Merkel said the situation was almost as bad as in 1997, when large areas in this region were seriously affected by floods, and praised the improvements to the dikes and infrastructure that had prevented a repeat of that catastrophe.

Merkel also emphasized the good relations between Germans and Poles, who she said had been equally affected by the recent flooding of the Oder River. But both Merkel and Platzeck warned of complacency. “The danger has not yet passed,” she said.

The alarm level in Frankfurt and southern regions of the Oder is still at four, the highest possible, but experts believe the water has reached its highest level for now. There has not been any serious damage in Germany so far, and the dikes have withstood the pressure.