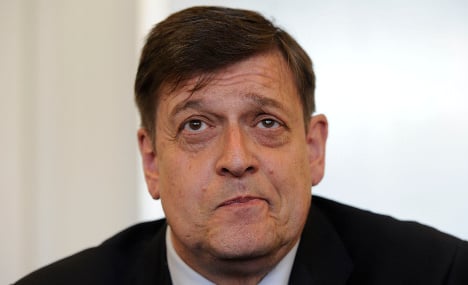 Tauss during the trial. Photo: DPA

Prosecutors convinced the judges that the 56-year-old had illegally possessed some 260 photos and 40 video clips containing child pornography between May 2007 and January 2009. The court also found that Tauss had sent five such photos and videos from his mobile phone during that time.

The defence did not deny Tauss possessed the illegal material, alleging instead he’d had it for work-related purposes for research about the scene. But the court found he had used it for personal interests.

“The overview shows that Tauss was not travelling through the virtual child pornography scene in fulfilment of his political duties, but out of private reasons,” lead Judge Udo Scholl told news agency DPA.

Tauss’ claims of special parliamentary exemption from the law were invalid, even if he was an expert in online criminality, the judge said.

“The same powers are valid for all parliamentarians,” he said. “This status equality forbids special rights for certain parliamentarians. The defendant knew what he did was forbidden and that no exception pertained to him. He’s not that naive.”

Scholl did concede that Tauss may not have possessed the illegal material out of sexual interest.

“It’s conceivable that he went into the child pornography scene out of curiosity,” he said.

The suspended sentence means that Tauss will serve no time in prison, but will have a criminal record.

“The defendant has been punished by the trial, and enough,” Scholl said.

But Tauss said he would appeal.

“This is a verdict that I can’t and don’t want to live with,” he said after the trial.

But on Friday prosecutors said Tauss stood before the court “not as a parliamentarian, but as a private man.”

After the investigation against him began, Tauss left the centre-left Social Democratic Party, for which he has been an MP since 1994. He then became the first and only member of the Pirate Party in the Bundestag until the general election last September.

Pirate Party spokesman Simon Lange told The Local on Friday that the party would make no decisions about Tauss’ membership until they reviewed the court’s verdict.

“We got to know Tauss as a very responsible person who brought his political experience to our party, and we trust that he will make the right decision for himself and the party,” Lange said. “Right now it is up to him if he wants to leave the party.”

A statement by the party following the verdict called the trial a “bad sign of public prejudgement,” and said “questionable press work” by public prosecutors had severely hindered the rule of law and forced them to defend themselves against “nasty accusations” of being a “paedophile party.”