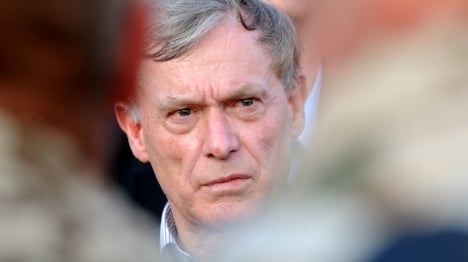 In an interview he gave during his recent visit to the strife-torn country, Köhler appeared to say that the public debate about the war in Afghanistan was gradually facing up to the fact that protecting foreign trade was a legitimate reason for military action.

The remarks from Saturday to broadcaster Deutschlandradio, which have just now been seized on by opposition politicians, have prompted a furious debate about Germany’s military deployment – and whether Köhler has damaged the image of the NATO mission in Afghanistan.

For example, free trade routes, for example to prevent instability in a whole region, which certainly have an negative impact on our opportunities via trade, jobs and income. All of that ought to be discussed and I believe that we are not doing too badly.”

The remarks appear to be a major departure from the political orthodoxy on the Afghanistan mission, which says the Bundeswehr is there to protect Germany from terrorist groups who would use the country as a base were it to descend into lawlessness or Islamist theocracy.

Germany was not conducting “a war for economic interests,” Oppermann said. It was, on the contrary, about security. Anyone who said differently was “making the case of the Left party,” he added, referring to Germany’s far-left socialists who strongly oppose the war.

“That is a thinly veiled expansion, through the constitution, of the acceptable grounds for a Bundeswehr mission for economic interests,” he told Der Spiegel.

“It reminds me of the English imperialists of the 19th century, who defended their naval supremacy with similar arguments,” Preuß said.

Bundeswehr soldiers were risking “life and limb for the export interests of giant companies.” It was a “war about influence and commodities,” which was not the idea covered by the Afghanistan mandate passed by the parliament, he said.

However, the conservative Christian Democrats (CDU) have defended Köhler, while showing some discomfort at his choice of words.

Conservative MP Ruprecht Polenz, who is also chairman of the foreign affairs committee, said Köhler had “expressed himself somewhat unclearly.”

The president had not been “announcing a new military doctrine for Germany,” but rather had been trying to make clear that Germany was carrying out its contribution to international security and stability, he told broadcaster Deutschlandfunk.

And through this, Germany naturally had an interest in free foreign trade.

“You see that indeed with the international mission against piracy on the horn of Africa,” he said.

A “clear mandate under international law” was obviously always a requirement for war, he said.

At the same time, Köhler’s statement was “not a particularly successful phrasing” to express these ideas, he admitted.