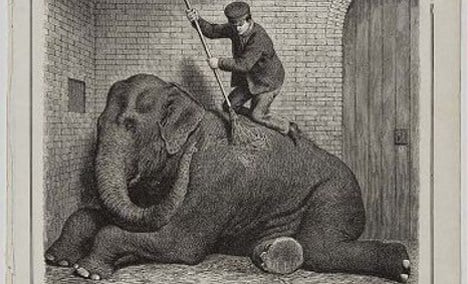 As an artist who grew up in the Black Forest, it’s only natural that Jan Imberi would form a close relationship with landscape. Through sculpture, video, and photography, Imberi ponders humanity’s understanding of things like forests. For his first solo exhibition, Imberi sailed forty trees up the River Spree to Kreuzberg, where his sculpture now stands. See the accompanying visuals at Laura Mars Gallery, a ten-minute walk away.

If windows are the eyes of a house, and eyes are the windows to the soul, than windows are the souls of the city. See the Berlin windows that caught photographer Istja Itho’s eye in this exhibition at the Charlottenburg Museum. And bring your own photo of your favorite window, because even if you don’t win the prize, your shot will at least be included in the next exhibition.

From Marlar to Schöne Marie – 150 Years of the Cologne Zoo

Learn about the history of Germany’s third oldest zoo. This year, Cologne Zoo celebrates its 150th anniversary and a special exhibition at the City Museum highlights major events like the arrival of the first rhinoceros “Schöne Marie,” in 1872, and the birth of Marlar the baby elephant in 2006.

These aren’t your ordinary Polaroids. First of all, they’re taken on a 1970s 20×24-inch camera on wheels. And then there’s the subject matter. Shots of Schnabel’s buddies like Lou Reed and Mickey Rourke are peppered in among shots of private rooms in the artist’s New York lair, Palazzo Chupi. See all 100 of them when the exhibition opens Sunday.

Frankfurt’s Städel Museum poses the question: Can you dance to art? Of course you can! Show them what’s up Saturday night when the museum hosts an art dance party extravaganza. DJs Steph and Amin Fallaha and British singer James Kakande provide just the right tunes for rocking to the artwork of Ernst Ludwig Kirchner.

There’s something really special about short films, and this acclaimed festival likes to highlight that fact, placing the genre into an art form all its own. Filmmakers from Germany, Hungary, Norway, Iran, South Korea, the USA, and beyond present some truly eye opening stories in a program of 300 brief but striking cinematic works.

Combine modern jive and west coast swing workshops with a little Bavarian culture. Instructors from the UK, New Zealand, France, and Germany teach you dance skills in the morning, then when night falls, you can practice in the city’s open air beer gardens after a few brews.