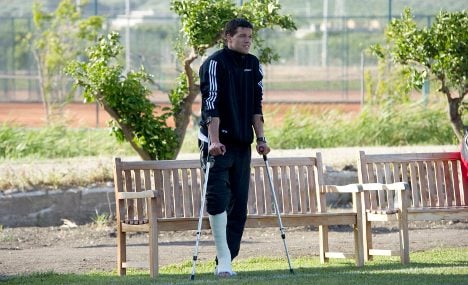 “After the draw in Cape Town, I said then: people should know that we can lose in the preliminary rounds to any of the other sides,” Ballack told German magazine Stern on Wednesday. “Australia, Serbia and Ghana are all athletic, tough teams.”

Damaged ankle ligaments mean Ballack has been ruled out of next month’s World Cup, which starts on June 11, and he says his side will need to fulfill their potential to make the last four.

“The team will need to play to their limits to beat some of the great teams in the knock-out round,” said the Chelsea midfielder. “That is just the same as it was before I had to pull out.”

Since Spain in 1982, Germany have never failed to reach at least the last eight of a World Cup finals and Ballack says Joachim Löw’s side will have that goal in mind when they open their campaign against Australia on June 13.

“It is terrible for a team if they can only enjoy a tournament from the semi-final stage onwards as everything else would mean a failure,” said Ballack. “It drives you on, it pushes you, but it is also a merciless game.”

Despite his ankle injury, Ballack visited the national team at last week’s training camp in Sicily.

With 98-caps to his name, Ballack’s experience will be sorely missed, but Löw’s young side can come of age, said the injured captain.

“Our team has a good mentality, they will not hide, they will put their heads down and go to the limits,” said Ballack. “Joachim Löw will tease the best out of them, of that I am convinced. In the last few tournaments we were second and third, so why hold anything back?”

With an air of expectancy growing at home for the public’s national heroes, Ballack says only German success in South Africa will be viewed as acceptable by their public.

“Germany is a nation that has to win,” said Ballack. “When I watched the German athletes at the Olympic Winter Games in February, I thought: it is the same for us. You have to really torture yourself to reach the heights which are expected of you, because you only get respect if you win.”