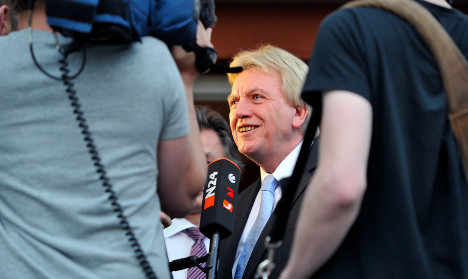 Koch announced the decision in favour of the 58-year-old politician in Bad Nauheim following a meeting of regional party leaders. The CDU now plans to hold an official party vote for Bouffier as state party leader at the state convention on June 12, where he will also be officially presented as a candidate for state premier.

The unanimous decision was a “great encouragement,” Bouffier told broadcaster Hessische Rundfunk, adding that he was taking on a “great legacy” and also planned to be “open for something new” when it came to state party politics.

“I look forward to this great challenge. I will tackle the job bravely,” he said.

But opposition politicians said they were doubtful Bouffier would offer the leadership the state required.

“The structure of Hessian politics will unfortunately not change because of this,” he said, adding the new state premier would be merely a “bankruptcy liquidator” assigned to clean up problems which he himself had a hand in creating over the years.

“As Germany’s oldest-serving interior minister since 1999 he has been a part of every decision,” he said, adding that the CDU made its decisions based on loyalty, and not quality.

“The unsolved problems will continue,” he said.

On Tuesday, Koch said he would step down this summer and leave politics, surprising many of Germany’s politicians. The 52-year-old Christian Democrat said he would stay in office until August 31.

“I specifically picked out this point in time,” he said at a press conference in the state capital Wiesbaden. “Politics is a fascinating part of my life, but politics isn’t my life.”

Koch said he planned to seek work in the business sector, but would only decide what position to pursue after leaving office. Besides resigning as state premier, Koch will also give up his leadership of the Hessian Christian Democrats and his deputy chairman position of the national CDU.

A conservative hard-liner, Koch has become a polarising figure in his state in recent years. Premier since 1999, voters punished his Christian Democrats during an election in 2008 after he started a controversial campaign with racist overtones against young immigrants. His image was first seriously tarnished for his involvement in a party slush fund scandal in 2000.

Lately Koch made headlines by demanding deep cuts in education and childcare funding in Hesse and the rest of Germany, eliciting the ire of the chancellor. He has long been considered an inner-party rival to Merkel, but she played down their contentious relationship on Tuesday.