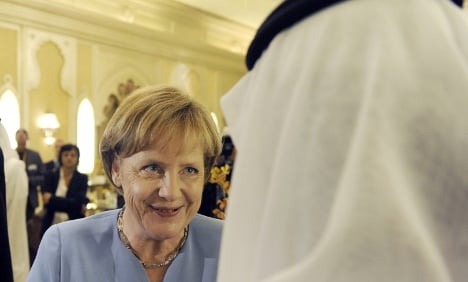 Sheikh Mohammed, the brother of President Sheikh Khalifa bin Zayed al-Nahayan whom Merkel is due to meet on Tuesday, stressed the UAE’s readiness to develop on its “strategic partnership” with Germany, the official WAM news agency reported.

Among the main topics of their meeting was the Middle East peace process as well as regional and global issues, said WAM.

Merkel is also due to visit Masdar City, a $22-billion Abu Dhabi project to build the world’s first carbon-neutral city which is scheduled to house 55,000 people when ready in 2015.

She was cited by WAM as assuring the crown prince that Germany was prepared to provide assistance for UAE projects on renewable energy.

WAM reported that it was in this context that she met the minister for higher education and scientific research, Sheikh Nahayan bin Mubarak al-Nahayan.

After their talks, the two delegations signed a series of agreements, including one on the purchase by Abu Dhabi Group of Siemens Electrical equipment worth about $203 million.

They also inked a memorandum of understanding on cooperation in exploration and development of oil and gas sites, as well as one between UAE and German companies for the maintenance of natural gas treatment facilities.

Emirati and German officials are to meet Tuesday in Abu Dhabi with the focus on promoting small and medium enterprises, air transport, the transfer of technology and renewable energy development, WAM said.

The United Arab Emirates, which has the world’s fifth largest proven oil reserves at 97.8 billion barrels, is Germany’s leading trade partner in the Middle East.

Trade between the two countries was valued at a record $8.5 billion in 2008, according to WAM.

Merkel’s tour of the oil-rich Gulf emirates comes amid financial market turmoil in the wake of a Greek debt crisis.

The UAE financial hub of Dubai rocked global financial markets in late November when it said it might be forced to freeze debt payments by state conglomerate Dubai World, stoking fears of a state default over sovereign debt.

Abu Dhabi, the richest of the UAE’s seven emirates, bailed out Dubai with a last-minute lifeline of $10 billion which enabled it to pay its imminent debt.