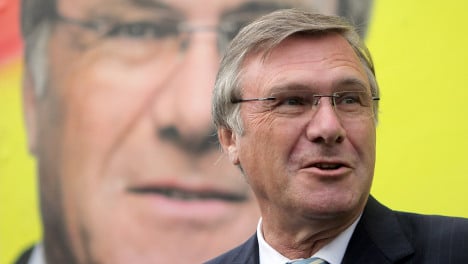 Gerhardt said mistakes made by the current leadership under Foreign Minister Westerwelle had led to the terrible polling results – in the current ZDF Politbarometer, the Free Democratic Party (FDP), scored just three percent.

“The chancellor should have been told early on that the FDP parliamentary party cannot go into the next general election without having realised its taxation promises,” said Gerhardt.

He said neither the FDP grass roots supporters, nor the parliamentary party were prepared to allow the subject to be taken from them in that fashion.

“The chancellor cannot shove one of our central projects to one side using a decree,” said Gerhardt.

Merkel put the planned tax reduction policy on ice after the North Rhine-Westphalia state election in which her Christian Democratic Union and the FDP performed badly, losing their combined state majority.

Gerhardt urged Westerwelle to work to improve the image of the party, which he said had to, “win back trust and be clear with conviction on themes that go further than the individual topics.”

Westerwelle was also advised to improve his performance as foreign minister. Gerhardt said the party must regain its strong profile in foreign policy, and that Westerwelle could do so if he took up the challenge.

And in the light of the North Rhine-Westphalia state government situation, with a coalition still not decided, the FDP’s Justice Minister Sabine Leutheusser-Schnarrenberger, said the party should not too picky about coalition partners.

“I want that the FDP opens itself up, on the federal level, from 2013,” she said. Should anyone not have got the hint about possible cooperation with the Social Democratic Party, she added, “The FDP must deploy its social policy competence more strongly than until now.”

And Birgit Homburger, head of the parliamentary FDP, said over the weekend that the party should work harder to make its mark in the current federal coalition.

The FDP has, “a clearly broader agenda as is generally perceived,” she said. She admitted that the coalition had, “not made a particularly sparkling start.”

“Now it is about making clear that the coalition is working decisively together.”