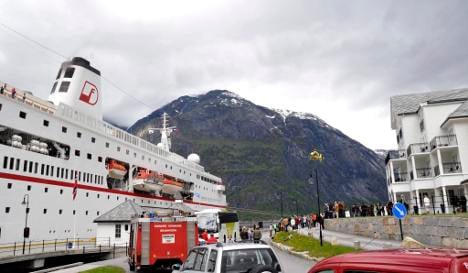 The fire started in the engine room and was presenting problems to fire crews with the thick smoke that developed, a local rescue spokesman said.

The 364 passengers – mostly Germans – and most of the 241 crew, as well as the two Norwegian pilots, were taken from the ship.

The heat developed by the fire was so intense that fire crews were hosing the hull down from outside to try to limit damage to the structure of the ship, which is famous in Germany due to the ZDF TV series.

Fire broke out at around 12:30 pm, while the ship was anchored in the small town of Eidfjord, deep in the picturesque Hardanger Fjord, nor far from Bergen on the Norwegian west coast.

All those on board were evacuated without any reports of injury.

It is not yet known what caused the fire, which at times threatened to spread through the 175-metre-long ship, and took four hours to extinguish.

The tourists, who were due to set sail for Hamburg on Sunday evening, were taken to local hotels and are making their way home by bus to Oslo and then ferry Kiel, said a spokesman for Deilmann, the company which owns MS Deutschland.

The ship will be taken to Bergen as soon as possible so that a damage evaluation can be undertaken.