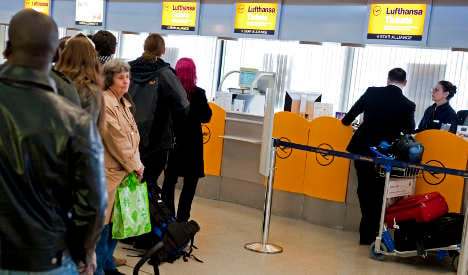 Union officials warned that the action planned by the 1,750 or so workers who provide airport services including luggage handling at Tegel and Schönefeld, could result in delays and cancellations.

He said the roughly 450 workers employed by GSI deserved a fixed payment rate, while the worst paid should see their pay increase by as much as €150 a month. Many are paid so poorly that they claim Hartz IV social support to supplement their wages, he said.

Those at the bottom of the pay scale should see a pay rise of 3.8 percent said Splanemann, while those earning more have already been offered a wage rate guarantee.

Strikes would be announced between six and 24 hours in advance, he added.

Globeground has said it would work with airlines and the airport managers to try to keep the impact on passengers as minimal as possible.

The last such strike was in 2007, when a walk-out of several hours by around 300 ground staff resulted in delayed flights.

Those seeking to take a train instead will in the future have a more difficult time getting information and advice from Deutsche Bahn, as a report suggests plans are afoot to cut the number of staff at travel centres by more than 20 percent.

Saturday’s Westfalen-Blatt local newspaper reported that it had seen an internal planning paper from the Bahn which talks of reducing travel centre staff numbers – and making those who remain, work faster.

The paper says that the travel staff would be reduced from the current number of 2,465 to 1,948, and that their current target of serving 80 percent of customers in less than 10 minutes would be increased to 85 percent.

A Bahn spokesman said that 7,000 new ticket machines were being installed around the country, but denied that the staff reduction plans were known or had been approved by the management.