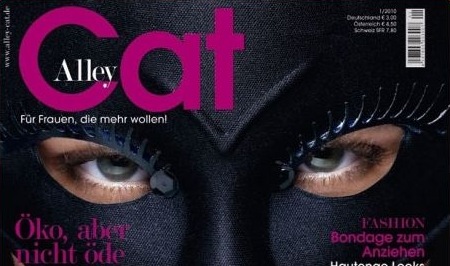 The 26-year-old Ina Küper has produced the 10,000-circulation magazine from her home beginning in 2008, but publisher Burda recently made her their youngest editor-in-chief ever.

“Alley Cat is aimed at a generation that very obviously grew up with the theme of sex,” Küper said.

The glossy magazine, aimed at 18 to 35-year-olds, doesn’t shy away from showing naked buttocks or genitalia, and the language is at times explicit. But there is “nothing sleazy,” about the content, and there will never be nudity on the cover, Küper said.

She said some of her inspiration came from the US series “Sex and the City.”

“I think without this series we wouldn’t be where we are now,” she said.

If the first edition is successful, Burda plans to publish the magazine monthly, and also has high hopes that of gaining a “fair number of men” as readers too.

“We said right away that this magazine had potential,” Burda head Ulrike Zeitlinger said, saying the publisher had been particularly impressed by Küper’s “unbelievable passion.”