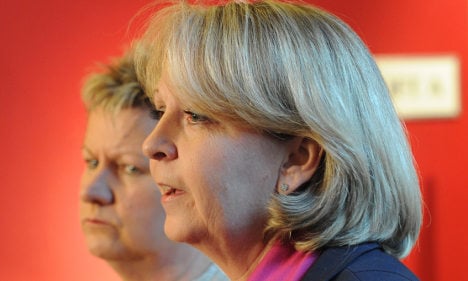 Saying the leftists weren’t ready to govern, Hannelore Kraft, the leader of the centre-left SPD in the state, broke off preliminary negotiations late on Thursday after only a few hours.

“In its current condition The Left party is neither ready to govern or form a coalition,” said Kraft, saying the hard-line socialists in NRW showed little comprehension of the country’s current democracy or communist East Germany’s troubled past.

“I was very disturbed at times,” she said.

Kraft also said The Left, formed from a merger of former East German communists and disgruntled western German trade unionists, was “frighteningly ignorant” on questions concerning the consolidation of the state budget.

“We would not have been able to build any trust here. We didn’t see any evidence of reliability,” she said.

Kraft’s assessment was largely confirmed by the Greens, who had hoped to be part of a left-wing coalition in North Rhine-Westphalia, and it means the Social Democrats could end up forming a so-called grand coalition with the conservative Christian Democrats (CDU).

The Left, however, angrily accused the SPD of never actually intending to form a government with them.

“The talks failed because of the SPD and Greens,” said Wolfgang Zimmermann, The Left’s leader in NRW. “It was all about East Germany…the whole thing was an excuse to clear the way for a grand coalition.”

But a deal between the SPD and the CDU could be hindered by the fact both parties won an equal number of seats in the May 9 election in Germany’s most populous state.

At the moment, the head of the CDU in North Rhine-Westphalia, Jürgen Rüttgers, is demanding to remain state premier in a grand coalition.

“I’m glad the SPD has accepted my offer to hold talks,” he said, adding there was now a chance to form a stable government.

But Kraft on Friday said voters could also be forced to go back to the polls.

“A new election is always possible in the end,” she said.

The only other option, the so-called “traffic light coalition” including the SPD, Greens and Free Democrats (FDP) – whose party colours are red, green and yellow respectively – is unlikely after the pro-business FDP ruled it out recently.