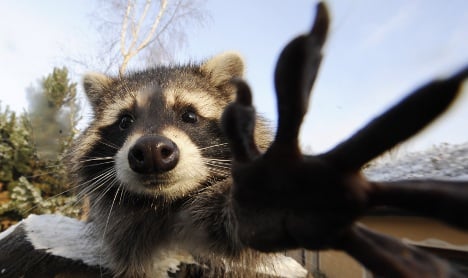 Encounters with wild animals in Berlin are generally moments of wonder – the fox quietly busy when spotted by a puffing jogger, the rabbits chasing each other across an open expanse of grass, the wild boar rooting around in the undergrowth of the woodland car park.

But there are times when the city’s furry residents irritate and inconvenience those of the two-legged variety – and this is when people call in Derk Ehlert, the German capital’s wildlife expert.

Officially he is in charge of “Protection of Biotopes and Species” for the Berlin city government. However much of his time is taken up acting as chief diplomat for relations between animal and humans.

On a recent spring day, his first stop was a large block of flats in the central district of Schöneberg, where rabbits had dug their warren entrance under a pathway causing part of it to collapse into the hole.

“We are worried this hole in the path will cause a problem, with people falling over and hurting themselves,” said the caretaker.

“There have always been rabbits here, but recently there seem to be more than ever. We used to see foxes here too. It was alright with the rabbits then, but this year there haven’t been any foxes.”

A wave of distemper had reduced fox numbers in Berlin, said Ehlert, which was why there were more rabbits than usual. He treated the concerns of the caretaker seriously, and offered tips of how to fill in all entrances to the warren at the same time as filling in the damage to the pathway with asphalt.

But he warned them not to get their hopes up of getting rid of them altogether.

“It would only work for a while – you will have rabbits again sooner or later,” he said.

“Imagine if there were three really great flats in the building, furnished and free – you could kick out the people living in there but you would soon have new people moving in.”

He said the caretaker would likely have to wait for the fox population to recover and come and restore the balance of predator to prey.

CLICK HERE FOR A GALLERY OF WILDLIFE IN BERLIN.

Ehlert’s next stop was to the rich district of Dahlem, where even the money available to the residents of the enormous villas had not saved their gardens from being used by wild boars to give birth.

“The expectant females leave the group and seek out somewhere quiet and safe to have their babies,” said Ehlert.

“That means they come into the town, and find nice quiet gardens where they are unlikely to be disturbed, either by other boars, or dogs. Of course they can be aggressive when disturbed in such a situation – either about to give birth or when protecting their babies.”

There was not much to be done in Dahlem either – the boars will leave of their own accord within a matter of weeks when the babies are strong enough to join the family group – although the gardens of nearby abandoned houses may well tempt them to return.

Logically, while people tend to stream out of the city into the forests at the weekend, this intrusion prompts an opposite commute by the boars – so they can get some peace and quiet.

“Of course they don’t know it’s Friday afternoon, but they see people taking their dogs out earlier and for longer, and they head into town where they can find food easily and undisturbed,” said Ehlert.

We then travelled to Spandau, where a member of a yacht club had been mightily surprised by a raccoon when he took his boat out for a spring return to the water.

With Ehlert on the phone for moral support and giving tips, he had managed to scare the raccoon off the boat, and discovered only minor damage to some cushions, indicating that the animal had not been there for too long.

“If it had been there all winter you would not have recognised the interior of the boat,” Ehlert told the man, who by the time of our visit had regained his composure.

We scouted around the area, looking at an under-construction boat house which Ehlert said could offer the kind of hiding place favoured by raccoons.

But the visit – like most during the day – was actually more about communicating with the people rather than rooting out the animals.

When he shows up to advise Berlin’s human residents, Ehlert is certainly there to help them – but he is also the city’s biggest wildlife advocate, educating the people and encouraging them to relax into the reality of living quite literally cheek-to-jowl with wildlife.

Most of his time is taken up with long-term work securing and preserving as much wildlife-friendly space in the city as possible. This involves delicate communication work with developers to try to get them to leave a few rough edges around their real estate projects.

He also managed to save Berlin’s most famous raccoon, which lives in the underground garage of a hotel on the city’s hectic Alexanderplatz square.

Ehlert said initially the hotel managers had appealed for suggestions of how to get rid of their unwanted guest, but he gently helped them realise it might make for better publicity if they were friendlier to the furry squatter.

Now named Alex and famous, there is no more talk of evicting him.