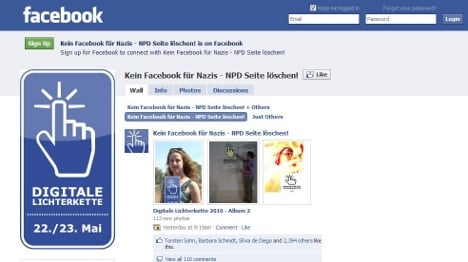 Members have been tasked with photographing themselves, arms outstretched, to simulate a human chain against the neo-Nazi party’s Facebook presence. They have also been asked to incorporate the new group’s logo – a hand on which the index finger is illuminated – into the photos.

The virtual demonstration is set to reach its pinnacle on May 22-23, when organisers hope the action will influence Facebook administrators to take action against neo-Nazi content on the network.

According to Stern previous attempts to report neo-Nazi or NPD party content have had limited success because the social network takes a lenient approach and the right-wing extremist organisations fight diligently against being banned from it.

The group had initially called for an “online flashmob” on Sunday that would bombard NPD Facebook pages with comments and photos – but the attempt failed when the neo-Nazis deactivated the site.

Other efforts have included the publication of neo-Nazi organisation members’ email addresses for a similar bombardment.

The “virtual candle-lit demonstration” is the first attempt to create a broad social front against right-wing extremist activity, Stern said, explaining that instead of anonymous street protests, users are putting their names and faces on the line.

The danger is that many young people are unable to recognise propaganda and attempts at indoctrination from these groups at first glance, head of the state intelligence agency Hans Wargel told daily Die Welt. Instead of blatant symbols such as swastikas, many are using graffiti and other less-recognisable imagery from youth culture, he said.

The tactic is new for these groups, he added, referring to a newspaper for the neo-Nazi NPD party called Deutsche Stimme, which recently encouraged its members to appear on online forums as people with humour, hobbies, and serious cultural interests.