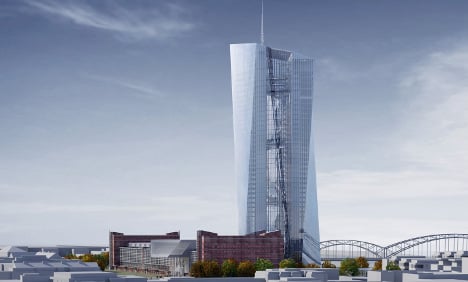 A mainly glass structure “will reflect the values – integrity, excellence, efficiency and transparency – that are essential to our activities,” ECB president Jean-Claude Trichet told guests protected under a huge white tent.

He spoke next to a gaping hole near the Main River in Frankfurt’s East End, and a landmark produce market built in 1928 that has been integrated into the design of the headquarters and will serve as a visitor and media centre.

Extensive efforts to preserve the market, including a legal challenge by its architect’s heirs, were responsible in part for a three-year construction delay that saw the official launch coincide with the eurozone’s worst crisis to date.

“A groundbreaking is always a signal for future expectations and hopes, a promise of continuity and permanence – exactly that which Europe needs,” Frankfurt Mayor Petra Roth noted in an address.

Trichet will not occupy the building himself since he is to step down in October 2011, two years before work is to be completed.

But he, head architect Wolf Prix and ECB governors placed building plans, euro banknotes and coins and newspapers from across the 16-nation eurozone in a metal box to be sealed inside the building’s foundation.

Most ECB headlines these days detail efforts to prevent a debt crisis from breaking up the economic bloc as finance ministers mull an unprecedented rescue plan to support troubled members such as Greece, Portugal and Spain.

And “if the euro fails, then Europe fails,” she warned.

In Frankfurt, Trichet vowed to respect the timetable and budget for the 44-storey ECB headquarters, which should be finished by the end of 2013, with full occupancy in 2014 instead of 2011 as originally planned.

Total costs have been estimated at €850 million at 2005 prices, when the budget was established.

Once inflation is taken into account, the final cost will likely be higher.

But the meticulous project is also designed to rejuvenate the surrounding neighbourhood and commemorate the human cost of the wholesale market’s troubled past.

During the Nazi era, Jews were held in its basement before deportation to concentration camps.

A jury that includes representatives of the ECB, Frankfurt and the local Jewish community is now choosing the final design for a memorial.

The new building’s slightly twisted towers will have taken a long time to make their mark in Frankfurt’s modern skyline.

An initial tender for the project was launched in August 2007 but cancelled less than a year later owing to a lack of competitive bids, as construction groups focused their attention on Gulf states, Asia and Russia.

The global economic crisis and an overhaul of the tender process resulted in fresh and broad interest from contractors, and allowed the bank to maintain it had managed to stay within its budget.

Trichet stressed Wednesday that ECB staff had been told “to keep a close eye on the quality, on the scheduling and on the costs of the project.

“The budget has to be respected,” he said.

Each eurozone member will have a representative office and the ECB governing council is to meet at the top of the higher southern tower. The buildings are expected to be 30 percent more energy efficient than German standards at the time of their design, with natural ventilation and a geo-thermal assisted heating network.