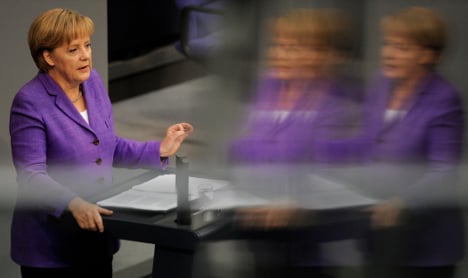 Defending Germany’s slice of a €750-billion ($914-billion) package to prevent the troubles of debt-ridden Greece spreading to the rest of Europe, she said the single currency was facing an “existential test” as it plunges on the markets.

“The current crisis facing the euro is the biggest test Europe has faced in decades, even since the Treaty of Rome was signed in 1957,” she said in a speech in parliament, referring to the treaty that created the European Union.

“This test is existential and it must be overcome … if the euro fails, then Europe fails,” she said, to loud heckling and jeers from opposition parties.

To overcome the turmoil that has battered the euro on the foreign exchange markets, the German chancellor proposed a “new stability culture” in Europe.

She added: “We need a comprehensive overhaul of the Stability and Growth Pact,” the regulations stating that EU countries should keep deficits below three percent of gross domestic product (GDP) and debt below 60 percent of GDP.

“Long-term stability is impossible without healthy public finances,” she stressed. “The rules must be geared to the strongest, not to the weakest … our (German) stability culture is tried and tested.”

German Finance Minister Wolfgang Schäuble is expected to propose a raft of measures to tighten the rules at a meeting with EU President Herman Van Rompuy.

Merkel said that European funds could be withheld from fiscal sinners and voting rights could be withdrawn. She also said that an “ordered sovereign insolvency procedure” needed to be established at the European level.

She also confirmed a decision made Tuesday by Germany’s securities market regulator to slap a ban on so-called naked short-selling in the shares of 10 financial institutions and eurozone government bonds.

Naked short-selling occurs when investors sell securities they do not own and have not even borrowed, hoping to be able to buy them back later at a lower price, thereby earning a profit.

She said the ban would be in place until Europe-wide regulations were agreed.

The euro hit a new four-year low against the dollar in Tokyo Wednesday after the move was announced as it added fuel to fears for Europe’s banks amid the deepening debt crisis.

Merkel also reiterated that she would campaign at the Group of 20 leading industrial powers for an international tax on the financial markets.

“If we do not get an agreement there … for an international tax, then we will have a discussion in Europe as to how we can organise the contribution of the financial sector so that people feel some sense of justice.”

Germany’s parliament is expected to vote Friday on the country’s share of the €750-billion eurozone bailout package, which could be as much as €150 billion.