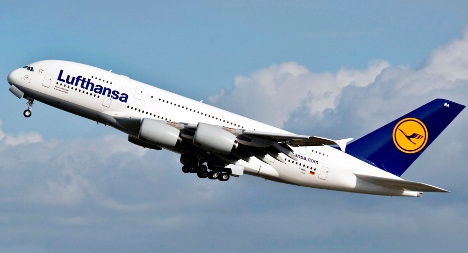 The massive double-decker plane was to leave the Airbus factory in Hamburg and fly to Lufthansa’s main hub in Frankfurt am Main. There it will be christened with the city’s name by Mayor Petra Roth.

The A380 will replace the Boeing 747-400 as Lufthansa’s flagship in June, when the airline will start regular service from Frankfurt to Japan. Routes to Johannesburg and Beijing will also feature the new big bird once Airbus delivers another three aircraft.

Lufthansa’s version of the A380 will have a capacity for 526 passengers, 420 in economy on the lower deck, as well as 98 business and eight first class seats on the upper deck.

The German airline has decided not to install a shower or cocktail bar in its A380s like a few of its competitors, opting instead for elegant design and attention to detail. Whereas economy passengers will have a bit more legroom and more ergonomic seating, first class travellers will be pampered with a seat that transforms into a two-metre long bed.

“We’ve been told by our guests that they sleep better onboard than in a hotel,” said Lufthansa product manager Christian Körfgen, referring to test flights. “The crew has often had to wake guests up for landing.”

A roundtrip first class ticket offering this luxury will, of course, have its price – up to €12,000 – but passengers willing to pay it will receive Lufthansa pyjamas.

“That’s not any more expensive than before,” said Lufthansa spokesman Michael Lamberty.

But the superjumbo’s first passengers won’t have to pay anything – before Lufthansa’s new A380 heads off to Japan it will take the German national football team to the World Cup in South Africa on June 6.