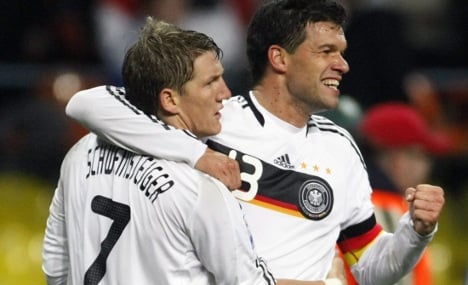 The 33-year-old Chelsea midfielder suffered torn ankle ligaments at Saturday’s FA Cup final win over Portsmouth after a heavy tackle from Kevin-Prince Boateng. The German national team doctor then ruled that Ballack, who was a crucial part of their bid to win the World Cup for a fourth time, would not recover in time for the tournament.

“I gave everything for the goal of South Africa,” Ballack told daily Bild from the team’s Sicilian training camp. “It is bitter to be kicked down like that in the last game of the season. It really hurts.”

But now other team members must fill the leadership vacuum before the games begin in South Africa, he acknowledged.

“Schweini must do it now and take on more responsibility,” Ballack said, referring to the 26-year-old Schweinsteiger by his nickname. “He is so confident and has class. I don’t see any others who can set the tone and bring such presence.”

But Ballack said he refused to speculate on who would be chosen to replace him as captain, citing Phillip Lahm, Schweinsteiger, Miroslav Klose and Torsten Frings as potential candidates.

“In the end Jogi Löw must decide alone,” he said of the national team’s coach.

And though his lawyer indicated this week that he would lodge a complaint against Boateng for the “intentional” tackle that effectively ended his World Cup dreams, Ballack said this would not happen.

“That brings nothing,” he said. “I must come to terms my own fate.”

Ballack also said he would not let the foul end his national team career, adding that if the healing process allowed, he would try to attend Germany’s games in South Africa in a show of support.