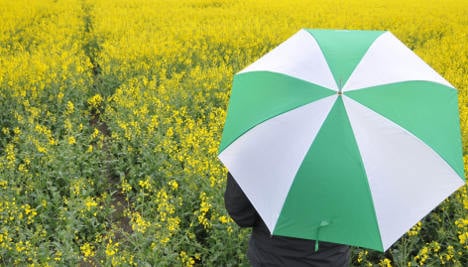 “After parts of southern Poland were hit with several hundred litres of rain per square metre, the low pressure system is sending its rain clouds to Germany,” DWD meteorologist Bernd Zeuschner said in a statement.

But the country will likely be spared the extreme weather has flooded parts of Eastern Europe, he added.

In the days ahead of the Pentecost holiday weekend the weather will likely remain erratic and much cooler than average May temperatures, with highs well below average.

Isolated thunderstorms are expected in eastern and southern regions on Tuesday, while brisk air from the northern coast could reach gale force in higher altitudes in the east.

Overnight more rain will hit the Alps and eastern regions, but the rest of the country will remain cloudy and cool, but dry, Zeuschner said.

Wednesday will see sustained rain in central and southern regions for much of the day, while scattered showers are expected in the west and thunderstorms in the north. Temperature highs will increase slightly to between 13 and 18 degrees.

The wet weather won’t let up on Thursday either, with steady rain in the southwest and scattered showers likely in the rest of the country.

While the work week will end for the three-day holiday weekend on Friday, the rain won’t be taking a break quite yet. Southeast and eastern regions will see further showers and thunderstorms that last into the night, with temperatures between 15 and 20 degrees.

But by Saturday afternoon temperatures in the southwest could reach as high as 25 degrees, though the north will still see showers.