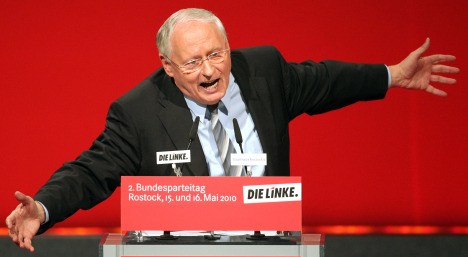 Lafontaine, one of the most colourful and controversial figures in German politics, steps down as leader of Die Linke party after undergoing cancer treatment last year.

But Lafontaine, 66, leaves as the party is performing well in the polls and

is represented in the governments of 13 of Germany’s 16 states.

And one of his last tasks as joint leader was to oversee a successful regional election campaign in Germany’s most populous state, North Rhine-Westphalia, where the party won its first election to the state legislature.

Three years after its foundation, Die Linke, a mix of former East German communists and West German leftists, has established itself as a major force in national politics, shaking up the more well-established mainstream parties.

Before defecting from the centre-left Social Democrats (SPD) in 2005 to set up Die Linke two years later, Lafontaine was one of the top SPD grandees, appointed finance minister in 1998 by then chancellor Gerhard Schröder.

In that position, he pushed hard for tax harmonisation in Europe, leading the eurosceptic Sun tabloid in Britain to publish a famous front page with his picture and the headline: “Is this the most dangerous man in Europe?”

He quit the ministry in 1999, angered over what he said were the Schröder government’s “neo-liberal” policies. Even then however, he rarely left the headlines.

Nine years previously, in the country’s first post-reunification election, he ran unsuccessfully as the SPD’s candidate for chancellor against Helmut Kohl, seen as the architect of the end of the country’s decades-long division.

During that campaign, he was nearly killed in a frenzied attack by a deranged knife-wielding woman. His abrupt and unexpected announcement in January that he would be stepping down at this weekend’s party conference left the party with a big hole to fill, but the pair tipped to take over vowed to continue his legacy.

Klaus Ernst and Gesine Lötzsch “will stick to the successful course taken by our predecessors Oskar Lafontaine and Lothar Bisky,” Ernst told the Hamburger Abendblatt in an interview this week.

“We want to end the madness of privatisation, we need a country-wide minimum wage and we want to bring our young soldiers back from Afghanistan,” said Ernst.

With the latest poll putting them at 11 percent, roughly what they achieved in September’s national elections, Die Linke now plays a pivotal role in German politics.

Speculation has been rife that after Lafontaine leaves the political scene, the party could form a coalition at the federal level with the SPD, something the centre-left party has so far ruled out.

Die Linke must decide, SPD chief Sigmar Gabriel told Stern magazine on Tuesday, whether it wanted to become a “reforming party” or to remain “an opposition party with a basically Communist and anti-parliament platform.”

As for Lafontaine, it seems that, while the party conference will be his last appearance on the national stage, Germany has not heard the last of him.

Asked by Die Welt daily what he planned to do in retirement, he said: “I have always had a close connection with nature. I am a passionate mushroom picker. I also love playing Canasta. I read a lot and go to the theatre.”

He would keep out of leftist politics, he added, as long as his legacy was followed. “But on important topics at the federal level, I will continue to voice my opinion.”