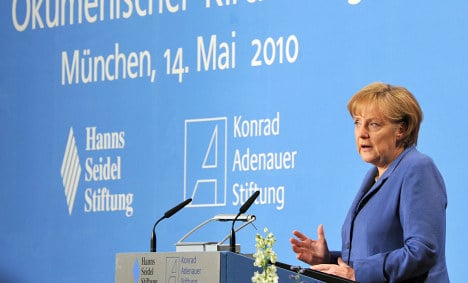 During her speech at Munich’s Ecumenical Congress, a meeting of Germany’s churches, Merkel said on Friday Germany had been living beyond its means for decades and must confront a central question in the coming weeks: “Where can we save?”

Amid the current crisis with the euro currency, Merkel urged all euro zone countries to address their budget deficits in an interview with Munich daily Süddeutsche Zeitung.

“The problem has to be tackled at the roots, meaning countries have to bring national finances in order and must strive to improve their competitive edge,” she said.

Koch has called on Germany’s coalition government to outline concrete savings targets and suggested that the federal government should review whether it could still afford its Kita day care centre guarantee plans.

“Here and there we’ve decided on programmes that will probably be much too expensive than first thought, such as the guarantee of day care for children under three,” he told daily Hamburger Abendblatt on Tuesday.

Koch also proposed extending the timeline on educational spending targets, which would see spending on schools and universities increase to 10 percent of the country’s gross domestic product.

Government spokesman Sabine Heimbach said no set decisions had been made on budget proceedings for 2011.

“On the other hand, it’s also clear that education and research are a point of emphasis for this coalition – and that’s evident in the coalition contract,” she said. “That also applies to expanding child care.”