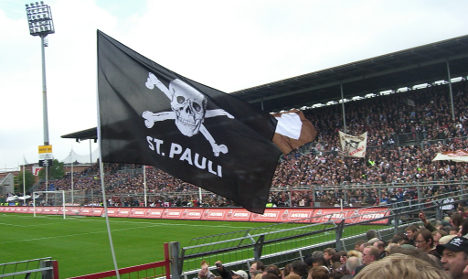 Attending a FC St. Pauli home match is a bit like going to an occult religious gathering.

Everywhere you look there are people dressed in black, hooded sweatshirts emblazoned with skulls and crossbones, and the air is thick with sweet, pungent smoke. Giant flags flutter around the stadium while small bottles of spirits are frequently tipped skywards. An excited buzz slowly builds in the ground before kickoff, eventually reaching a crescendo of cheering as the home team marches solemnly out on to the pitch to the opening chords of AC/DC’s Hells Bells.

It’s a heady experience that keeps the fans packing the Millerntor Stadium regardless of the club’s sporting fortunes and Hamburg’s frequently inclement weather. But supporters planning to mark St. Pauli’s 100th anniversary on May 15 were handed reason to celebrate early after the club was promoted to Germany’s top-flight Bundesliga last week.

It’s the first time since 2002 that St. Pauli has played in the country’s best league, but things haven’t always been so rosy for the club. Originally formed as an extension of a gymnastic club by a group of Hamburg football enthusiasts, St. Pauli’s fortunes over the last century have been as wobbly as one of its supporters after a few too many Astra beers.

“It’s never easy with this team,” says hard-core St. Pauli fan Dirk Albrecht. “We suffered for years from financial mismanagement and on the sporting side we’ve rarely been relaxed about our position on the table. Most of the time we’re either fighting for promotion or against relegation.”

The 42-year-old Albrecht first began going to matches in 1987. Impressed by the size and type of stadium – capacity is currently 23,000 with over half the ground unseated – as well as “the feeling, that as a spectator, I could influence the game,” the sales manager reckons he has probably seen 90 percent of their home matches since.

Traditionally one of the more popular clubs in northern Germany, St. Pauli has spent much of its existence competing in the second tier football and, to the chagrin of many of its supporters, almost permanently in the shadow of city’s other major team, Hamburger Sport Verein (HSV).

After some strong seasons in the 1950s and 1960s, the club’s first foray into the modern Bundesliga came in 1977. It wasn’t a long stay. Relegated the following season, a year later they were on the verge of bankruptcy; denied a license as a result, they fell two more divisions into an amateur league.

Situated on the fringe of Hamburg’s notorious red light district right next to a massive World War II bunker, the club was lucky to see a few thousand fans turn up to home games during the early to mid 1980s. And it was in such a poor financial state that players had to drive their own team van to away matches.

It was round this time, however, that the punks, students and artists drawn to the area’s cheap rents and affordable housing began attending games. Bringing with them plenty of booze and pirate flags adorned with the Jolly Roger – which have since become the unofficial emblem of the club – they imbued Millerntor with a reputation for not only being a fun place to watch football, but also to party. Less than 20 years later St. Pauli had transformed into a cult team, attracting massive crowds and frequently selling out its matches.

More than just a club

“A visit to the stadium is about more than just supporting the team,” says Axel Annink, a public relations agent. “There’s the social side to it – meeting friends and sharing experiences with them, but also the club’s liberal politics and the stance of fans against right-wing extremism.”

Famously anti-fascist, anti-racist, and anti-sexist, the club has one of the highest female attendances in Germany, as well as sponsoring a clean water project in Cuba: Viva con aqua. They even have an openly gay chairman, theatre impresario Corny Littmann.

“The core of our supporters stand by political engagement,” says Dirk Albrecht. “And they have never stopped reminding the management that there is a social responsibility for the club.”

For other fans, however, going to games is more about having fun. “I support St. Pauli because I’m a Hamburger,” says Markus Dreyer, a season-ticket holder. “And because I’m sociable and like to have a beer or two with friends.”

His wife, Jennifer, a teacher and “all-weather fan,” likes meeting friends as well, but is also attracted by the loyalty of St. Pauli fans. “No matter what, they are always there. I like that and can identify with it,” she says.

With the Bundesliga once again on the horizon, the club and fans will be hoping that history doesn’t repeat itself. Back in 2002 they finished the season dead last, and fell another division the next.

In deep financial trouble and with the club’s license to play professional football once again threatened, the fans nevertheless refused to desert St. Pauli. Turning up to home games en masse, they pitched in with fundraising projects including the now famous Retter, or “Saviour,” t-shirt campaign which sold 140,000 shirts in its first six weeks.

The club management is now determined not to betray the fans’ loyalty despite the pressure to splash out on new players to compete in the Bundesliga.

“Seven years ago we didn’t even know if there would be a 100th birthday,” St. Pauli’s chairman Littmann recently told news agency DDP. “We’re only going to spend what we have.”